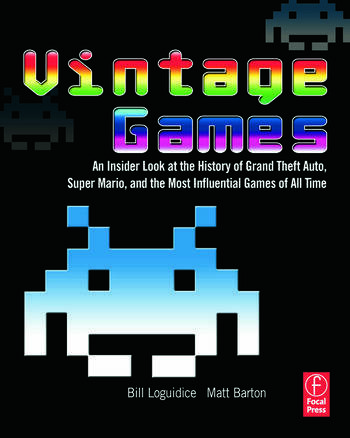 Vintage Games: An Insider Look at the History of Grand Theft Auto, Super Mario, and the Most Influential Games of All Time

Vintage Games explores the most influential videogames of all time, including Super Mario Bros., Grand Theft Auto III, Doom, The Sims and many more. Drawing on interviews as well as the authors' own lifelong experience with videogames, the book discusses each game's development, predecessors, critical reception, and influence on the industry. It also features hundreds of full-color screenshots and images, including rare photos of game boxes and other materials. Vintage Games is the ideal book for game enthusiasts and professionals who desire a broader understanding of the history of videogames and their evolution from a niche to a global market.

"They say you can't go back again, but reading Vintage Games comes close. Open the book, and I'm back in the video arcades of my youth. Turn the page, and I'm in college again, discovering the secret joys of the early PC games. Turn the page again, and I'm back in my living room, playing Mario with my young kids. But Vintage Games is more than just a trip down memory lane, because the authors analyze each game in ways that bring fresh insights to those nostalgic memories.?--Steve Meretzky, Veteran Game Designer "An interesting and insightful trip down a gamer's memory lane, focusing on titles that have become benchmarks in videogame history.?--Didi Cardoso, Managing Editor, Grrlgamer.com"The video game industry has a poor track record when it comes to preserving its history. Fortunately, scholars and enthusiasts have stepped in to fill the void, and Vintage Games is an essential contribution to this effort. Loguidice and Barton are to be commended for documenting the history of gaming's greatest landmarks.?--Michael Abbott, The Brainy Gamer Blog and Podcast, Professor of Theater and Film Studies, Wabash College"Essential reading for video game fans and game studies scholars alike!?--Laurie N. Taylor, Digital Library Center, University of Florida"A must-read for anyone even remotely interested in video gaming history - from the hardcore to the casual. A book that anyone that has ever held a joystick would enjoy."--Shane R. Monroe, Host of RetroGamer Radio/Monroeworld.com"The book is smart and fun - much like the games it addresses.?--Dr. Matthew S. S. Johnson, Southern Illinois University Edwardsville

Vintage Games: An Insider Look at the History of Grand Theft Auto, Super Mario, and the Most Influential Games of All Time