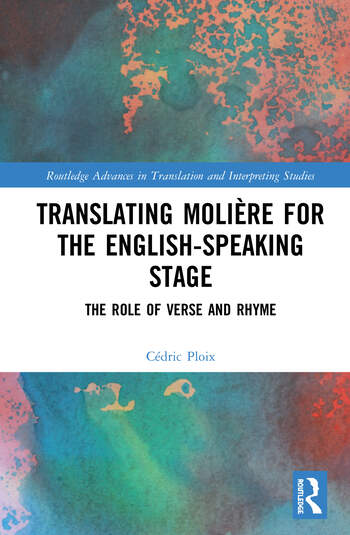 Translating Molière for the English-speaking Stage: The Role of Verse and Rhyme

This book critically analyzes the body of English language translations Moliere’s work for the stage, demonstrating the importance of rhyme and verse forms, the creative work of the translator, and the changing relationship with source texts in these translations and their reception. The volume questions prevailing notions about Moliere’s legacy on the stage and the prevalence of comedy in his works, pointing to the high volume of English language translations for the stage of his work that have emerged since the 1950s. Adopting a computer-aided method of analysis, Ploix illustrates the role prosody plays in verse translation for the stage more broadly, highlighting the implementation of self-consciously comic rhyme and conspicuous verse forms in translations of Moliere’s work by way of example. The book also addresses the question of the interplay between translation and source text in these works and the influence of the stage in overcoming formal infelicities in verse systems that may arise from the process of translation. In so doing, Ploix considers translations as texts in and of themselves in these works and the translator as a more visible, creative agent in shaping the voice of these texts independent of the source material, paving the way for similar methods of analysis to be applied to other canonical playwrights’ work. The book will be of particular interest to students and scholars in translation studies, adaptation studies, and theatre studies

Molière Revitalised Beyond the Channel

The French Alexandrine and English Verse Forms: A Prosodic Equivalence?

What Can Verse Bring to Drama

Cédric Ploix teaches languages at Radley College, Tutor in Translation in the Department for Continuing Education at the University of Oxford, UK and research collaborator on multilingual theatre and theatre translation with Instant Mix Theatre Company.

Translating Molière for the English-speaking Stage: The Role of Verse and Rhyme