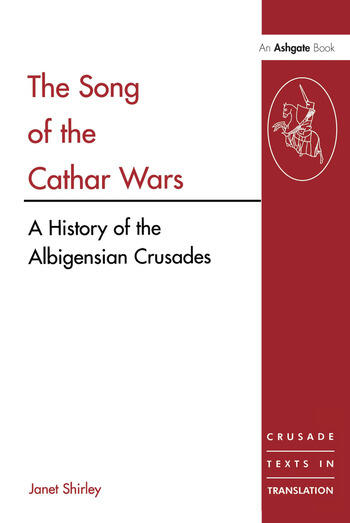 The Song of the Cathar Wars: A History of the Albigensian Crusade

The Song of the Cathar Wars is the first translation into English of the Old ProvenÃ§al Canso recounting the events of the years 1204-1218 in Southern France. In an effort to extirpate the Cathar heresy, Pope Innocent III launched what is now known as the Albigensian Crusade, but it was fiercely resisted by the lords and people of the Languedoc, if in the end in vain. This ’song’ was written in two parts, the first by William of Tudela, a supporter of the crusade; the second by an anonymous continuer, wholeheartedly in sympathy with the southerners, although not with the heretics themselves. It stands as a historical source of great importance, not least because it depicts the side that lost. The poem is also a skilful, dramatic and often impassioned composition, evoking the brilliant world of landed knights and the glories and bloody realities of battle. Janet Shirley is an award-winning translator of works on the French Middle Ages. Other publications by her include the Song of Roland and, in this Crusade Texts in Translation series, Crusader Syria in the 13th Century and, with Peter Edbury, Guillaume de Machaut: The Conquest of Alexandria.

Contents: Maps; Introduction; The Song of the Cathar Wars by William of Tudela; The Song continued by the Anonymous; Chronology; Index.

Janet Shirley is a distinguished translator of works on the Crusades and the French Middle Ages. Her previous translations include the Song of Roland and The Latin Kingdom of Jerusalem by Professor Jean Richard.

'... this is quite simply one of the best sources of medieval warfare one could hope for ... the all-important fact that it is the first available [rendering] in English (and faithfully translated by Janet Shirley) will ensure its great utility ... It is highly recommended.’ The Catholic Historical Review 'Shirley’s translation is thoroughly clear... The book is beautifully presented too, with maps, an informative introduction, superbly researched footnotes, conveniently placed on the page of the text, and a very useful chronology which tells us what happens after the poem closes.' The Cantuarian 'The Song of the Cathar Wars is a crucial source for historians of the crusades, medieval heterodoxy and its suppression, the creation of modern France, medieval Occitan society, and its development of vernacular epic historiography in the Middle Ages. This accomplished, unfrilly, and readable translation opens it up for the first time to readers for whom the modern French versions of Martin-Chabot and Henri Gougaud represent an obstacle' Medium Ã†vum

The Song of the Cathar Wars: A History of the Albigensian Crusade