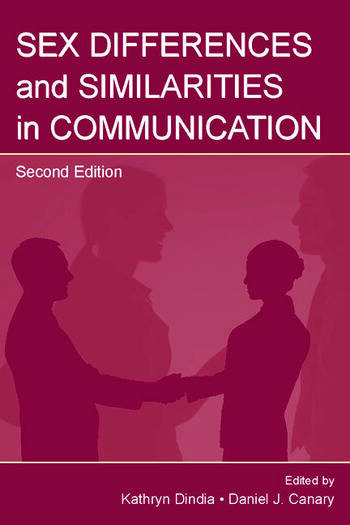 Sex Differences and Similarities in Communication

Sex Differences and Similarities in Communication offers a thorough exploration of sex differences in how men and women communicate, set within the context of sex similarities, offering a balanced examination of the topic. The contents of this distinctive volume frame the conversation regarding the extent to which sex differences are found in social behavior, and emphasize different theoretical perspectives on the topic. Chapter contributors examine how sex differences and similarities can be seen in various verbal and nonverbal communicative behaviors across contexts, and focus on communication behavior in romantic relationships. The work included here represents recent research on the topic across various disciplines, including communication, social psychology, sociology, linguistics, and organizational behavior, by scholars well-known for their work in this area.

In this second edition, some chapters present new perspectives on sex/gender and communication; others present substantially revised versions of earlier chapters. All chapters have a stronger theoretical orientation and are based on a wider range of empirical data than those in the first edition. Readers in communication, social psychology, relationships, and related fields will find much of interest in this second edition. The volume will serve as a text for students in advanced coursework as well as a reference for practitioners interested in research-based conclusions regarding sex differences in communicative behavior.

Sex Differences and Similarities in Communication