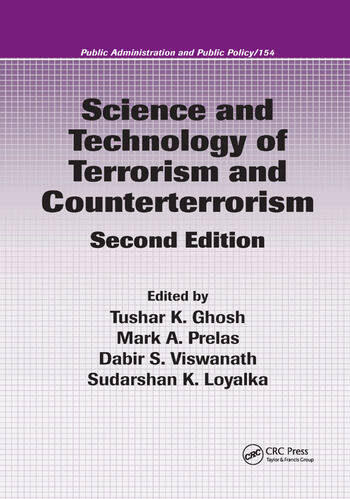 Traditionally, resources on terrorism and counterterrorism tend to focus on the social, behavioral, and legal aspects of the subject, with minimal emphasis on the scientific and technological aspects. Taking into account these practical considerations, the second edition of Science and Technology of Terrorism and Counterterrorism discusses the nature of terrorism and the materials used by terrorists. It describes how intelligence professionals and law enforcement personnel can detect and destroy these materials, and how they can deal with terrorist groups.

This volume begins by introducing the shift in analysis of terrorist attacks after September 11, 2001 and summarizes selected case studies. It discusses the origin and nature of terrorism and the factors involved in diplomacy. Covering a broad range of topics, the book examines:

As terrorist activities increase globally, it is critical that those charged with protecting the public understand the myriad of ways in which terrorists operate. While we cannot predict where, when, and how terrorists will strike, our vigilance in staying abreast of the terrorist threat is the only way to have a fighting chance against those who seek to destroy our world.

A Brief Theory of Terrorism and Technology, H. K. Tillema

The Group Psychology of Terrorism, M. A. Diamond

Biological Terrorism: Preparation for Response—What the Government Can Do in Defending the Homeland, M. C. Warwick

Intelligently presented and thoroughly referenced and indexed, the book offers a good balance of scientific and managerial information. Through an examination of the history of terrorism, the editors present a series of questions to assist in the development of prevention and emergency management programs. The first chapter looks at the link between the use of technology and the larger concept of terrorism. … Subsequent, highly educational chapters explain biological, nuclear, chemical, agricultural, and cyber threats with ample definitions, tables, and diagrams. Each provides helpful perspectives for decision and policy makers regarding assessments, prevention, and intervention. … The text is highly recommended to security professionals who seek a broader understanding of terrorist threats and technical countermeasures.
—Paul H. Aube, B.Sc., CPP, CAS (Certified Antiterrorism Specialist) in Security Management, January 2011