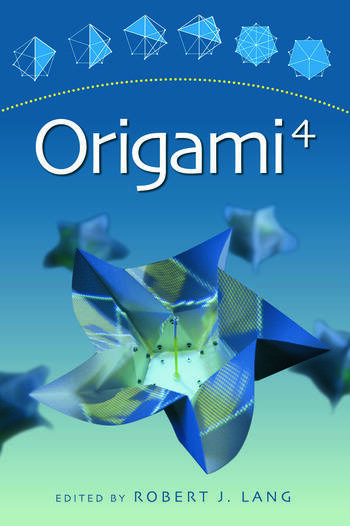 The connections between origami, mathematics, science, technology, and education have been a topic of considerable interest now for several decades. While many individuals have happened upon discrete connections among these fields during the twentieth century, the field really took off when previously isolated individuals began to make stronger connections with each other through a series of conferences exploring the links between origami and "the outside world." The Fourth International Meeting on Origami in Science, Mathematics, and Education (4OSME), held in September, 2006, at the California Institute of Technology in Pasadena, California, brought together an unprecedented number of researchers presenting on topics ranging from mathematics, to technology, to educational uses of origami, to fine art, and to computer programs for the design of origami. Selected papers based on talks presented at that conference make up the book you hold in your hands.

Origami and Technology
The Science of Miura-Ori: A Review
Koryo Miura
Origami-Inspired Self-Assembly
Galen T. Pickett
Expandable Tubes with Negative Poisson’s Ratio and Their Application in Medicine
Zhong You and Kaori Kuribayashi
Airbag Folding Based on Origami Mathematics
Christoffer Cromvik and Kenneth Eriksson

An avid student of origami for more than 40 years, Robert J. Lang is regarded as a leading master of the art, with over 500 designs catalogued and diagrammed. Following a successful career as a physicist and engineer, during which he authored or coauthored over 80 papers and 50 patents awarded and pending on lasers, optoelectronics, folding, and computational origami, he is now a full-time origami artist.Lang's work combines aspects of the Western school of mathematical origami design with the Eastern emphasis on line and form to yield models distinctive, elegant, and challenging to fold. His work has been shown in New York's Museum of Modern Art; Paris's Carrousel du Louvre; the Peabody Essex Museum, in Salem, Massachusetts; San Diego's Mingei International Museum; and the Nippon Origami Museum, in Kaga, Japan, among others. In 1992, Lang became the first Westerner invited to address the Nippon Origami Association's annual meeting, and he has been an invited guest at international origami conventions around the world.A pioneer of the cross-disciplinary marriage of origami with mathematics, Lang has been one of the few Western columnists for Origami Tanteidan Magazine, the journal of the Japan Origami Academic Society. He is the author or coauthor of nine books and has consulted on applying origami to engineering problems ranging from air-bag design to expandable space telescopes. He is a fellow of the Optical Society of America, a member of the IEEE Photonics Society, and editor in chief of the IEEE Journal of Quantum Electronics.

These 46 diverse, first-class articles give the field a fabulous overview and offer invaluable citations, particularly to Internet resources. In particular. R. C. Alperin and R. J. Lang's 'One-, Two-, and Multi-Fold Origami Axioms' and T. Y. Chow and C. K. Fan's 'The Power of Multifolds' together make a fascinating contemporary foil to any examination of classical ruler-and-compass constructions in a geometry or Galois theory course. Highly recommended.
—D. V. Feldman, CHOICE, June 2010

Origami is an unusual area of mathematics in that it is as much an art form as it is mathematics and very young children can be exposed to and enthralled by it. The breadth of structures that can be made by folding paper is substantial and expanding all the time. This book is a mathematical examination and explanation of origami; it is a collection of research papers written by some of the experts in the field.
—Charles Ashbacher, The Mathematical Association of America, December 2009

Fantastic book! It will create new folds in your brain whether you are an artist, scientist, inventor, educator, or simply like to be amazed. The balance between mathematical theory and manipulative practice, and between artistic and educational applications makes this a book for everyone. I look forward to using this book personally and professionally.
—Robert Root-Bernstein, Ph. D., co-author of Sparks of Genius, June 2009

copy of Origami 4 just arrived!! Wow, I have just flipped through it, and for now this is the book I would take with me on a deserted island. Instead I need to finish getting ready for our local meeting tomorrow night, teaching at a retirement home on Friday, and teaching during a Girl Scout Alumni Campout this weekend. The cover is shiny and slick, in color, and the binding seems sturdy for all 560 pages of the book. The center stays open by itself, and closer to the covers, not much pressure is needed to keep it open. The spine margins allow the page to be read, without breaking the spine. The pages are well printed, with good B&W contrast. Sadly, no color inside. We have been spoiled with color. It is helpful, but truly not necessary. It is a great book, thanks to all who submitted articles, and to Robert Lang for editing.
—Kathy Knapp, Founder of OPA (Origami Peoria Area), September 2009