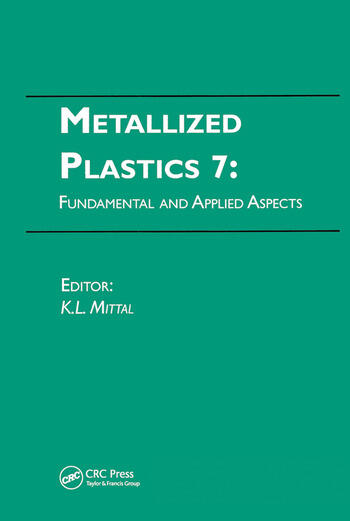 This volume documents the proceedings of the 7th Symposium on Metallized Plastics: Fundamental and Applied Aspects, held in Newark, New Jersey, December 2-3, 1999. This volume contains a total of 16 papers, which were all rigorously peer reviewed and suitably revised before inclusion. The book is divided into two parts: Metallization Techniques and Properties of Metal Deposits, and Interfacial and Adhesion Aspects. The topics covered include: various metallization techniques for a variety of plastics including some novel developments involving suitable plastic pretreatments; modification of polymers by plasma and ion-assisted reactions; metal doped plasma polymer films; metal-polyimide nanocomposite films; investigation of metal/polymer interactions by a variety of techniques; ways to improve adhesion of metal/polymer systems; modeling of metal/polymer interfaces; application of surface analytical techniques in the arena of metallized plastics; and ultrathin films on metal surfaces. This volume offers a wealth of information and represents current commentary on the R&D activity taking place in the technologically highly important field of metallized plastics and is of value and interest to anyone interested in the fundamental or applied aspects of metallized plastics.