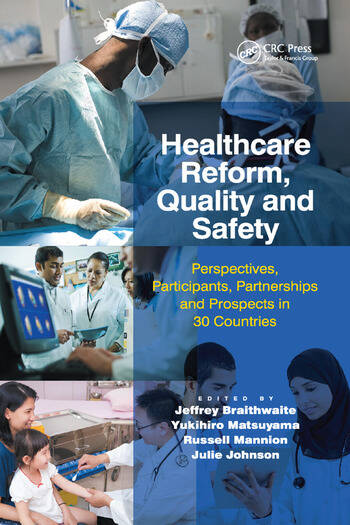 This book offers a global perspective on healthcare reform and its relationship with efforts to improve quality and safety. It looks at the ways reforms have developed in 30 countries, and specifically the impact national reform initiatives have had on the quality and safety of care. It explores how reforms drive quality and safety improvement, and equally how they act to negate such goals. Every country included in this book is involved in a reform and improvement process, but each takes place in a particular social, cultural, economic and developmental context, leading to differing emphases and varied progress. Methods for tackling common problems - financing, efficiencies, effectiveness, evidence-based practice, institutional reforms, quality improvement, and patient safety initiatives - also differ. Representatives from each nation provide a chapter to convey their own situation.

Professor Jeffrey Braithwaite is a leading health services and systems researcher with an international reputation for his work investigating and contributing to systems improvement. He has particular expertise in the culture and structure of acute settings, leadership, management and change in health sector organisations, quality and safety in health care, accreditation and surveying processes in international context and the restructuring of health services. Professor Braithwaite is well known for bringing management and leadership concepts and evidence into the clinical arena and he has published extensively (more than 400 refereed contributions, and 600 total publications) about organisational, social and team approaches to care which has raised the importance of these in Australia and internationally. He has presented at or chaired international and national conferences, workshops, symposia and meetings on more than 600 occasions, including over 60 keynote addresses. Professor Yukihiro Matsuyama, PhD, is Research Director at The Canon Institute for Global Studies and Affiliate Professor at the Chiba University of Commerce, both in Japan. His research examines the sustainability of safety-net systems in Japan, including healthcare, pensions, pandemic crises and employment, through international comparison analysis. He is advisor to the healthcare working group of the regulatory reform council of Japan’s Abe administration, as well as a member of the welfare corporation reform committee of their Ministry of Health, Labor & Welfare. Professor Matsuyama has published many books including Health Reform and Economic Growth (2010), which greatly influenced Japanese government policies. Professor Russell Mannion, BA (Hons), PG Dip Health Econ, PhD, FRSA holds the Chair in Health Systems at the University of Birmingham where he is currently Director of Research at the Health Services Management Centre. He also holds a professorial position at the University of Oslo.

’In Healthcare Reform, Quality and Safety the editors and contributing authors skilfully address questions about whether, how and to what extent healthcare reforms affect quality and safety. The book provides valuable and extensive international comparisons between health reform strategies from 30 health systems in five global regions. Perhaps uniquely, the authors present distinct differences in health systems, national healthcare reforms and quality and safety outcomes while they also note similarities in goals, values and, occasionally, outcomes.’ Paula Hyde, Durham University, UK ’What do people do when reforming health systems? They take different approaches in different countries - with different results but important common lessons. This book offers a unique collection of case studies from 30 countries plus commentary and synthesis from leading academics in the field of health system reform.’ Trisha Greenhalgh, University of Oxford, UK ’A remarkable compendium describing the journeys of change and reform in the world’s healthcare systems. These accounts show the integrity of those involved, the challenges they face and the difficulty of evaluating system level change. Ultimately I was most struck by the optimism and humanity of the authors in sharing their stories and their determination to learn from both failure and success across the world.’ Charles Vincent, University of Oxford, UK