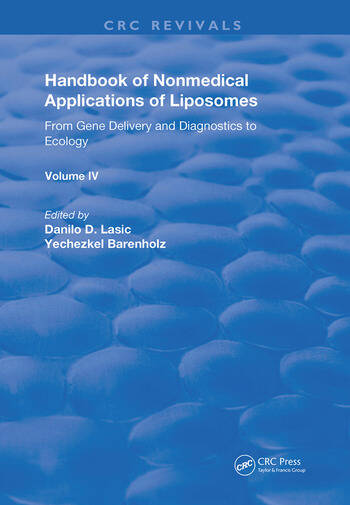 Handbook of Nonmedical Applications of Liposomes: From Gene Delivery and Diagnosis to Ecology

First published in 1996, liposomes have become an important model in fundamental biomembrane research, including biophysical, biochemical, and cell biological studies of membranes and cell function. They are thoroughly studied in several applications, such as drug delivery systems in medical applications and as controlled release systems, microencapsulating media, signal carriers, support matrices, and solubilizers in other applications. While medical applications have been extensively reviewed in recent literature, there is a need for easily accessible information on applications for liposomes beyond pharmacology and medicine. The Handbook of Nonmedical Applications of Liposomes fills this void.This unique new handbook series presents recent developments in the use of liposomes in many scientific disciplines, from studies on the origin of life, protein function, and vesicle shapes, to applications in cosmetics, diagnostics, ecology, bioreclamation, and the food industry. In these volumes many of the top experts contribute extensive reviews of their work.

Handbook of Nonmedical Applications of Liposomes: From Gene Delivery and Diagnosis to Ecology