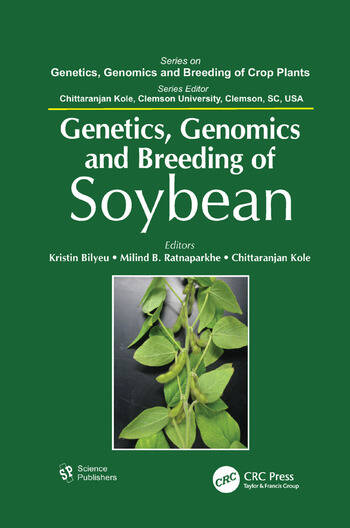 Genetics, Genomics, and Breeding of Soybean

The soybean is an economically important leguminous seed crop for feed and food products that is rich in seed protein (about 40 percent) and oil (about 20 percent); it enriches the soil by fixing nitrogen in symbiosis with bacteria.

Soybean was domesticated in northeastern China about 2500 BC and subsequently spread to other countries. The enormous economic value of soybean was realized in the first two decades of the 20th century, with world production of soybean tripling in the last 20 years. In addition to human consumption, it is a major protein source in animal feeds and is becoming a major crop for biodiesel production. In the international trade markets, soybean is ranked number one in the world among the major oil crops.

For many decades, plant breeders have used conventional breeding techniques to improve soybeans. While soybean production continues to expand as demand for soybeans and soybean products increases, there is a need for more sophisticated techniques. Bridging traditional research with modern molecular investigations on soybean, this volume explores the recent advances in soybean genome mapping, molecular breeding, genomics, sequencing, and bioinformatics. The book will be useful to soybean researchers as well as researchers working with other crop species.

Genetics, Genomics, and Breeding of Soybean