Winning the Publications Game: The smart way to write your paper and get it published, Fourth Edition

CRC Press is pleased to share with you our author Q&A session with Tim Albert, author of Winning the Publications Game. Albert talks about his title and what makes it different to others, which is available for purchase here. 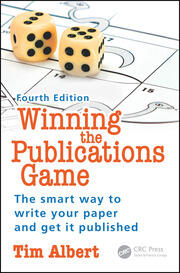 1. Can you describe your book in one sentence?
Winning the Publications Game describes a simple 10-stage process that will help people to write a scientific paper – and get it published.

2. Who would be interested in reading your book?
Anyone involved in writing a scientific paper, particularly if they are unsure of the task or finding it difficult. The book is particularly suitable for those setting out to write a paper for the first time, though those who have written some already should find plenty of useful tips. Academics in fields other than science should also find the book helpful because, though the examples come from science writing, the basic principles apply to all disciplines.

3. What is your academic background?
Thin. I was thrown out of science lessons at the age of 14, though some years later I managed to get a degree (a BSc as it happens) in psychology and sociology. I have also had formal training as a journalist and as a trainer. This meant that when I started to get involved in academic writing I came as an outsider.

4. How did you get involved in scientific paper writing?
I was running courses on effective writing for health professionals when a Dutch company invited me to design and run courses specifically on writing papers. The first course I designed was conventional, concentrating on telling participants what they should put into papers. I soon realised that this was not helpful. So I developed a second- generation course which not only concentrated on the process of writing, but also encouraged participants to come with data and develop a paper as the course progressed.

5. What makes your book stand out from its competitors?
One strength is that it is founded on the experience I gained while teaching several hundred short courses. Another is that it tries to make writing easier, not harder. It also brings in all kinds of skills that have not traditionally been considered part of the writing process - like product definition, marketing, time management, people management, mind mapping, free writing - and (a much underestimated component) celebrating success!

6. Has the book changed over its four editions?
Surprisingly little. One major change has been the extraordinarily rapid development of electronic publishing. This has caused some technical alterations: for example the first edition ended with posting a completed article; now the article is whizzed off into the ether by pressing the SEND button. Another change has been a greater awareness of research misconduct, and ethical issues are much more prominent.

7. What feedback have you received?
Many people have told me that the book has helped them to get their papers written and published. One professor wrote to say that it had helped his team become one of the most important in his research area.

8. What are your hopes for the academic publishing industry?
I would like to see a time when the validation of science is done by independent non-profit making organisations. This will allow academic publishing companies to concentrate their skills and efforts on the communication of science – ensuring that important findings are swiftly disseminated and, where appropriate, put into practice.

9. Do you have any events lined up? Attending any conferences?
No. But I would be honoured to accept any invitations.

10. Do you have plans for future books? What’s next in the pipeline for you?
I have moved away from medical writing and have written a memoir, entitled Mostly we had it good, which will be published later this year. It covers the last five decades of the 20th century - with observations on family life, education, journalism – and of course the highs and lows of running courses on writing skills. Otherwise I enjoy cultivating my garden, though I sometimes wonder why I exchange one life ruled by deadlines with another.
www.timalbert.co.uk