Congratulations to Doug Stinson, being named as CRC Press's Mathematician of the month for October 2018!

CRC Press is pleased to share with you our author Q&A session with Douglas Stinson, author of Cryptography: Theory and Practice, Fourth Edition. 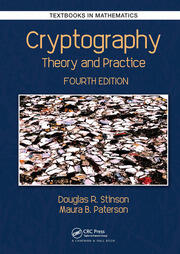 Congratulations on the publication of your book, Cryptography: Theory and Practice, Fourth Edition and being named Mathematician of the Month! What inspired you to write this book? The first edition of this book was published in 1995, followed by later editions in 2002 and 2006, and now the fourth edition has just been published.

When the first edition appeared, there were only a few textbooks on cryptography. Bruce Schneier's popular book had appeared the previous year, but it was not really a textbook. I felt at the time that there was a need for a general textbook covering all main areas of cryptography, that could be used at the advanced undergraduate or beginning graduate level. Now of course there are dozens of crypto textbooks and monographs to choose from.

Over the years, I have prepared new editions of the book in an attempt to keep it up to date and to reflect advances in the field. The fourth edition comes 12 years after the third edition, so a great deal of time was spent thinking about what "new" material to include and what "old" material to delete. Also, the field of cryptography has grown to such an extent that it is difficult to keep up with all the recent developments. This was one main reason why I involved a co-author, Maura Paterson, in preparing the new edition. It had reached the point where the project seemed to be too big for me to handle by myself. It proved to be a major benefit to have someone else to help make decisions about the book, and of course to contribute to writing new material. Maura and I have been research collaborators for about ten years now, and it was important to have a co-author that I knew I could work well with, which is why I asked her to be a co-author.

The previous edition came out in 2006, what are the main differences between that edition and the new fourth edition?
The third edition was published in 2006. There are many updates and changes in the fourth edition. Probably the most important is a new chapter on "post-quantum cryptography" (this phrase refers to cryptography that would remain secure if and when practical quantum computers are built).  As well as incorporating new material, notable additions include a broad introductory chapter to serve as an overview of the book, and appendices to summarize all the mathematical background.

What audience did you have in mind whilst writing you book?
Cryptography textbooks seem to involve one of  two main audiences: the "computer science" approach to cryptography puts a major emphasis on complexity theory, as opposed to the "mathematical" approach. My book is more on the mathematical side, but I have always tried to make it as accessible as possible to readers who might not be mathematicians. And I have also included several important results pertaining to "provable security" (the CS approach to crypto) even though it is not the focus of the book.

What is your academic background?

What is innovative about your research?
In much of my research over the years, I have tried to combine combinatorial mathematics with cryptography and information security. I enjoy the cross-fertilization of different fields and how results in one area can influence another area.

Who has influenced you the most?
Probably my PhD supervisor, Ron Mullin. Another main influence was Gus Simmons of Sandia Labs.

What first attracted you to mathematics?

Do you have any plans for future books? Whats next in the pipeline for you?

I am thinking about writing a book on design and analysis of algorithms.  I actually wrote a short book on this topic that was published in 1985 by the Charles Babbage Research Centre, which was Ralph Stanton's publishing arm. I prepared the book using an early desktop Mac computer. After having taught algorithms courses many times in the intervening years, I think it would be a good time write an updated book on the subject.

What do you feel has been a highlight for you, in your career?

Being named a Fellow of the Royal Society of Canada.

What do you see yourself doing in ten years' time?

I will be retiring in 2019, so it remains to be seen if I will be involved in mathematics ten years from now. I am also an amateur musician (I play trumpet) and I hope to continue and expand my musical activities when I retire.

What is the last book you read (non-academic)?

I am currently reading "Vinegar Girl" by Anne Tyler.

Sign up for email alerts from CRCPress.com and be the first to know about new books in your area of interest. You will also be eligible for:

Only available in our email and print promotions. Take full advantage of your insider savings and free shipping when you buy directly from CRCPress.com