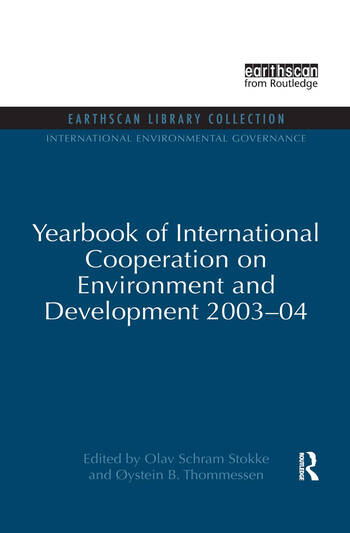 Yearbook of International Cooperation on Environment and Development 2003-04

'The Yearbook's extensive coverage makes a valuable contribution in promoting international co-operation on environment' Xie Zhenhu, Minister of the State Environmental Protection Administration (SEPA) of China 'A vital contribution in terms of reliable research and information on key issues of sustainable development. It constitutes an invaluable tool for facilitating the dialogue among all stakeholders involved in the implementation of the commitments agreed to in the World Summit on Sustainable Development (WSSD)' Ian Johnson World Bank Vice President for Sustainable Development The essential reference to all the rapidly multiplying international agreements on environment and development issues. This ninth annual edition of the Yearbook demonstrates the international community's position on specific environment and development problems, the main obstacles to effective international solutions, and how to overcome them. It assesses both the achievements and shortcomings of co-operation, distinguishing between the rhetoric and the reality of environment world politics. Contents * Current Issues and Key Themes * Agreements on Environment and Development Systematically listed key data and illustrations concerning the most important international agreements presented on the basis of information from the organizations in question and other sources, covering such matters as: objectives ? scope ? time and place of establishment ? status of participation ? affiliated instruments and organizations ? major activities ? secretariat ? finance ? rules and standards ? monitoring and implementation ? decision-making bodies ? key publications ? Internet sources. This edition includes several recently adopted conventions and protocols. * Intergovernmental Organizations (IGOs), including UN specialized agencies objectives ? type of organization ? membership ? date of establishment ? secretariat ? activities ? decision-making bodies ? finance ? key publications ? Internet sources. * International Non-governmental Organizations (NGOs) * objectives ? type of organization ? membership ? date of establishment ? secretariat ? activities ? budget ? key publications ? Internet sources. Originally published in 2003

Yearbook of International Cooperation on Environment and Development 2003-04