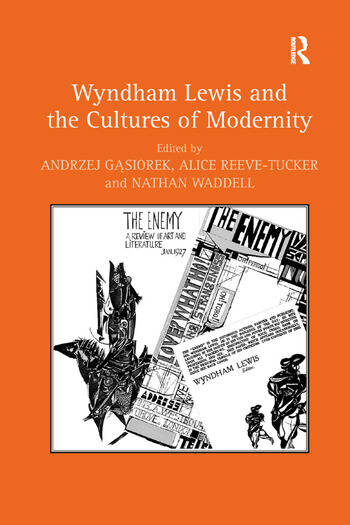 Wyndham Lewis and the Cultures of Modernity

Making a strong case for a revaluation of Wyndham Lewis (1882-1957), this collection argues that significant aspects of Lewis's writing, painting, and thinking have not yet received the attention they deserve. The contributors explore Lewis's contributions to the production and circulation of modernism and assess the links between Lewis's writing and painting and the work of other key contemporary figures, to position Lewis not only as one of the first twentieth-century cultural critics but also as one who anticipated the work of the Frankfurt School and other social theorists. Familiar topics and themes such as Vorticism receive fresh appraisals, and Lewis's significance as a philosopher-critic, novelist, and artist becomes fully realized in the context of his associations with important figures such as John Rodker, Charlie Chaplin, Evelyn Waugh, Naomi Mitchison, and Rebecca West. Lewis emerges as a figure whose writings on politics, corporate patronage, shell shock, anthropology, art, and cinema extend their influence into the late twentieth and early twenty-first centuries.

'These dozen essays bring insight and original scholarship to an examination of the complex duality of Lewis’s project and persona in action, both in the familiar arenas of Vorticism and Blast and in his later engagement with philosophy, politics, cinema, radio, the youth cult, and the cultural ramifications of shell-shock. Lewis emerges from his determination to take on the world as a powerful defender of the artist’s role as relentless satirist, himself exemplar and critic of the contradictory forces shaping twentieth-century modernity'. Peter Brooker, University of Nottingham, UK 'Completed by a 16-page bibliography and an index, this thoroughly-researched and carefully-documented volume proves very stimulating... the book as a whole is a very useful contribution to the study of Wyndham Lewis's complex work and, more broadly, to the exploration of twentieth-century modernity viewed through the prism of culture.' Cercles 'This is a broad and enterprising collection, and is justified both by the variety of Lewis’s creative and critical activity and of his associations... These essays will be of benefit to the growing number of undergraduates and postgraduates who are electing to work on Lewis; they also have much that is new to offer both the browsing generalist and the Lewis scholar.' Modernism/modernity

Wyndham Lewis and the Cultures of Modernity