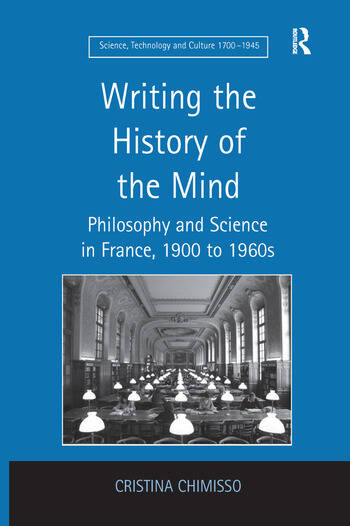 Writing the History of the Mind: Philosophy and Science in France, 1900 to 1960s

For much of the twentieth century, French intellectual life was dominated by theoreticians and historians of mentalité. Traditionally, the study of the mind and of its limits and capabilities was the domain of philosophy, however in the first decades of the twentieth century practitioners of the emergent human and social sciences were increasingly competing with philosophers in this field: ethnologists, sociologists, psychologists and historians of science were all claiming to study 'how people think'. Scholars, including Gaston Bachelard, Georges Canguilhem, Léon Brunschvicg, Lucien Lévy-Bruhl, Lucien Febvre, Abel Rey, Alexandre Koyré and Hélène Metzger were all investigating the mind historically and participating in shared research projects. Yet, as they have since been appropriated by the different disciplines, literature on their findings has so far failed to recognise the connections between their research and their importance in intellectual history. In this exemplary book, Cristina Chimisso reconstructs the world of these intellectuals and the key debates in the philosophy of mind, particularly between those who studied specific mentalities by employing prevalently historical and philological methods, and those who thought it possible to write a history of the mind, outlining the evolution of ways of thinking that had produced the modern mentality. Dr Chimisso situates the key French scholars in their historical context and shows how their ideas and agendas were indissolubly linked with their social and institutional positions, such as their political and religious allegiances, their status in academia, and their familial situation. The author employs a vast range of original research, using philosophical and scientific texts as well as archive documents, correspondence and seminar minutes from the period covered, to recreate the milieu in which these relatively neglected scholars made advances in the history of philosophy and science, and produced

Dr Cristina Chimisso is a senior lecturer in the Department of Philosophy at The Open University, UK.

'This book is excellent - a wonderful resource for both students, who get a wonderfully clear introduction to French philosophy of science and its background, and for scholars, who get a number of nuanced new interpretations of any number of key texts.' Martin Kusch, University of Cambridge, UK 'For much of the twentieth century French intellectual life was dominated by theoreticians and historians of mentalité: Lucien Lévi-Bruhl, Léon Brunschvicg, Hélène Metzger, Gaston Bachelard, Georges Canguilhem and Alexandre Koyré, to name but a few. This was a coherent enterprise with its own agenda and network of institutions. However, recent studies have broken it up into anthropology, sociology, psychology, history of science, history of philosophy, etc. This fascinating work is the first to do justice to the movement as a whole. Combining sensitive historical analyses with sharp and precise presentations of the major debates, Writing the History of Mind will have wide appeal to historians of science, philosophy, and anthropology, and more generally of modern European culture. Nick Jardine, University of Cambridge, UK

Writing the History of the Mind: Philosophy and Science in France, 1900 to 1960s