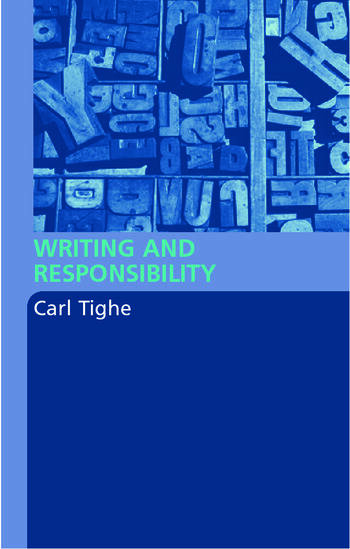 In a world where literary scandals often end up in court, the issue of responsibility in writing has never been more important. In this groundbreaking study, Carl Tighe asks the questions every writer needs to consider:

*What is it that writers do? Are they responsible for all the uses to which their writing might be put? Or no more responsible than their readers?
*How are a writer's responsibilities compromised or defined by commercial or political pressures, or by notions of tradition or originality?
*How does a writer's audience affect their responsibilities? Are these the same for writers in all parts of the world, under all political and social systems?

The first part of this book defines responsibility and looks at its relation to ideas such as power, accuracy, kitsch and political correctness. The second part examines how particular writers have dealt with these issues through a series of often-controversial case studies, including American Psycho, Crash and The Tin Drum.

Writing and Responsibility encourages its readers to interrogate the choices they make as writers. A fascinating look at the public consequences of the private act of writing, Carl Tighe's book is a must-read for everyone who writes or studies writing.

Carl Tighe teaches Creative Writing at the University of Derby and is a successful writer of both fiction and non-fiction. His first fiction collection Rejoice! & Other Stories was nominated for the David Higham Prize and short-listed for The Irish Times Award; his second collection Pax: Variations won him the City Life Writer of the Year 2000 Award. His first novel Burning Worm, was short-listed for the 2001 Whitbread Award and won the Author's Club Award. His non-fiction includes: The Politics of Literature and Gdansk, which was nominated for the Silver PEN Award. His most recent publication was the novel KssssS: A Tale of Sex, Money and Alien Invasion.

'Throughout, Tighe is an intelligent, measured and informative guide. His prose effortlessly synthesizes literary and critical considerations, statistics and wider cultural contexts. Far from being simply a text-book, this sophisticated, engaged and beautifully-readable monograph ought to be read as an individual, creative contribution to contemporary thought about the writing process.' - Writing in Education

'The refreshing thing about Tighe's approach is that in both domains he is willing to make judgements. This is not another post-modernist, anything goes pot pourri.' - Literature and History

'Finally someone has written the book I've been wanting my students to read.  This is a book well worth reading, and it makes an important contribution to the field.  Buy it; set it on your courses; work through the chapters; test it out.' - Jen Webb, International Journal for the Practice and Theory of Creative Writing