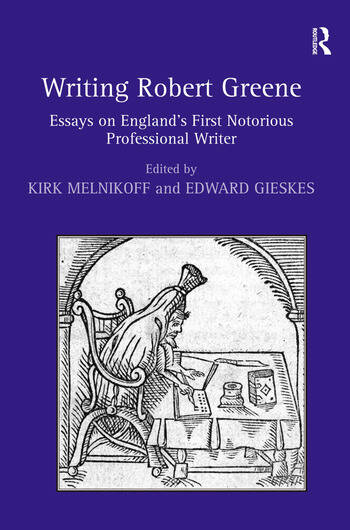 Robert Greene, contemporary of Shakespeare and Marlowe and member of the group of six known as the "University Wits," is the subject of this essay collection, the first to be dedicated solely to his work. Although in his short lifetime Greene published some three dozen prose works, composed at least five plays, and was one of the period's most recognized-even notorious-literary figures, his place within the canon of Renaissance writers has been marginal at best. Writing Robert Greene offers a reappraisal of Greene's career and of his contribution to Elizabethan culture. Rather than drawing lines between Greene's work for the pamphlet market and for the professional theatres, the essays in the volume imagine his writing on a continuum. Some essays trace the ways in which Greene's poetry and prose navigate differing cultural economies. Others consider how the full spectrum of his writing contributes to an emergent professional discourse about popular print and theatrical culture. The volume includes an annotated bibliography of recent scholarship on Greene and three valuable appendices (presenting apocrypha; edition information; and editions organized by year of publication).

'...a timely, well-crafted collection, with a fresh, integrated approach to Greene’s work and an impressive representation of established and emerging scholars...The collective discussion about the relationship between pamphlets and plays should influence our thinking about Elizabethan literary culture in general. This volume offers a stimulating, revisionary, and significant exploration of Greene.' Kent Cartwright, University of Maryland, USA ’...offer fresh, postmodern readings of Greene...Recommended.’ Choice ’ This is an enormously rich volume. Its essays produce a conversation compelling both in its nuanced understanding of Greene's work and in its account, more broadly, of the formal and social pressures that influenced late sixteenth-century writing for print and for the playhouse. Although I am particularly impressed with that larger conversation, I also want to stress the considerable strength of its individual interlocutors.’ Renaissance Quarterly 'There are no weak essays in the book... the collection serves as an overdue appreciation of Greene's remarkable career.' Sixteenth Century Journal