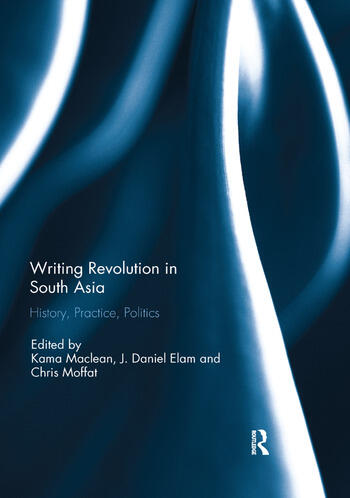 This comprehensive volume examines the relationship between revolutionary politics and the act of writing in modern South Asia. Its pages feature a diverse cast of characters: rebel poets and anxious legislators, party theoreticians and industrious archivists, nostalgic novelists, enterprising journalists and more. The authors interrogate the multiple forms and effects of revolutionary storytelling in politics and public life, questioning the easy distinction between ‘words’ and ‘deeds’ and considering the distinct consequences of writing itself. While acknowledging that the promise, fervour or threat of revolution is never reducible to the written word, this collection explores how manifestos, lyrics, legal documents, hagiographies and other constellations of words and sentences articulate, contest and enact revolutionary political practice in both colonial and post-colonial South Asia.

Emphasising the potential of writing to incite, contain or reorient the present, this volume promises to provoke new conversations at the intersection of historiography, politics and literature in South Asia, urging scholars and activists to interrogate their own storytelling practices and the relationship of the contemporary moment to violent and contested pasts.

1. Introduction: On the Form, Politics and Effects of Writing Revolution J. Daniel Elam and Chris Moffat

2. Born Like Krishna in the Prison-House: Revolutionary Asceticism in the Political Ashram of Aurobindo Ghose Alex Wolfers

4. Gandhi and the Terrorists: Revolutionary Challenges from Bengal and Engagements with Non-Violent Political Protest Durba Ghosh

7. ‘My Heart, My Fellow Traveller’: Fantasy, Futurity and the Itineraries of Faiz Ahmed Faiz Roanne Kantor

10. A Prehistory of Violence? Revolution and Martyrs in the Making of a Political Tradition in Kerala Dilip M. Menon

11. Revolution and Revelation, or, When is History Too Soon? Kama Maclean

Kama Maclean is an associate professor of South Asian and World History at the University of New South Wales, Sydney, NSW, Australia, and the editor of South Asia: Journal of South Asian Studies. She is the author of A Revolutionary History of Interwar India (2015).

teaches in the Department of English and Drama, University of Toronto, Canada. He specialises in theories of World Literature, with a specific focus on twentieth-century South Asian literature and political writing.

is a lecturer in South Asian and Global History at Queen Mary University of London, UK.