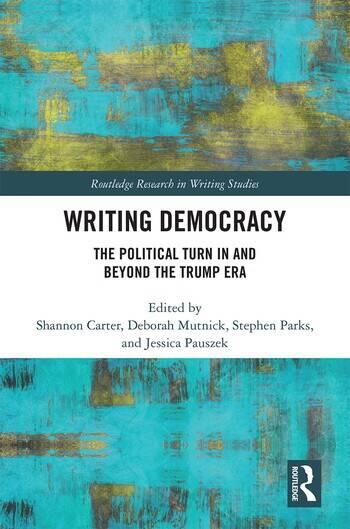 Writing Democracy: The Political Turn in and Beyond the Trump Era

Writing Democracy: The Political Turn in and Beyond the Trump Era calls on the field of writing studies to take up a necessary agenda of social and economic change in its classrooms, its scholarship, and its communities to challenge the rise of neoliberalism and right-wing nationalism.

Grown out of an extended national dialogue among public intellectuals, academic scholars, and writing teachers, collectively known as the Writing Democracy project, the book creates a strategic roadmap for how to reclaim the progressive and political possibilities of our field in response to the "twilight of neoliberalism" (Cox and Nilsen), ascendant right-wing nationalism at home (Trump) and abroad (Le Pen, Golden Dawn, UKIP), and hopeful radical uprisings (Black Lives Matter, Occupy Wall Street, Arab Spring). As such, the book tracks the emergence of a renewed left wing in rhetoric and activism post-2008, suggests how our work as teachers, scholars, and administrators can bring this new progressive framework into our institutions, and then moves outward to our role in activist campaigns that are reshaping public debate.

Part history, part theory, this book will be an essential read for faculty, graduate students, and advanced undergraduate students in composition and rhetoric and related fields focused on progressive pedagogy, university-community partnerships, and politics.

Part I: Mapping the Political Turn

Chapter Two: Composition’s Left and the Struggle for Revolutionary Consciousness

Chapter Three: Organize as If It Were Possible to Create a Movement That Will Change the World": An Interview with Angela Davis

Chapter Five: A Pedagogy for the Political Turn

Chapter Six: "I'd Like to Overthrow Capitalism, But Meanwhile, I would Like the Nazis to be Completely Demoralized": An Interview with Dana L. Cloud

Chapter Nine: Nudging Ourselves Toward a Political Turn

Chapter Eleven: The Political Turn and the Two-Year College: Equity-Centred Partnerships and the Opportunities of Democratic Reform

Chapter Twelve: How Does it Feel to be a Problem at the 9/11 Museum?

Chapter Fourteen: Pass the Baton: Lessons from Historic Examples of the Political Turn, 1967-68

Chapter Fifteen: The Visa Labyrinths: Writing Our Way Through the U.S.-Columbian Border

Shannon Carter is Professor of English at Texas A&M-Commerce, where she teaches courses in community writing and digital storytelling. Her publications include articles in College English, CCC, and Community Literacy Journal, and The Way Literacy Lives: Rhetorical Dexterity and the "Basic" Writer (SUNY Press, 2008). With Deborah Mutnick in 2012, she edited a special issue of Community Literacy Journal emerging from the first Writing Democracy conference in 2011, which won the 2012 Best Public Intellectual Special Issue from the Council of Editors of Learned Journals. Her current book project project traces the history of community writing alternatively designed to reify and resist racial injustice in her conservative, relatively isolated university town, which is also the subject of a digital humanities project funded, in part, by NEH.

Deborah Mutnick is Professor of English at Long Island University Brooklyn and author of Writing in an Alien World: Basic Writing and the Struggle for Equality in Higher Education. Other publications appear in a range of journals and edited collections. She is currently researching Richard Wright’s relevance and political, intellectual, and literacy development.

Steve Parks is author of Class Politics: The Movement for a Students Right go Their Own Language and Gravyland: Writing Beyond the Curriculum in the City of Brotherly Love, as well as a textbook, Writing Communities. He is founder of New City Community Press; Co-Founder/Board Chair of Syrians for Truth and Justice; and Editor of Studies in Writing and Rhetoric as well as Working and Writing for Change, Parlor Press

Jessica Pauszek is Assistant Professor of English and Director of Writing at Texas A&M University-Commerce. Her work has appeared in CCC, Community Literacy Journal, Literacy in Composition Studies, and Reflections. She is the co-editor of Best of the Journals in Rhetoric and Composition and Writing and Working for Change series. Her current book project explores working-class community literacy practices of the Federation of Worker Writers and Community Publishers as well as examines an archival curation project alongside community members in the context of precarity.

Writing Democracy: The Political Turn in and Beyond the Trump Era