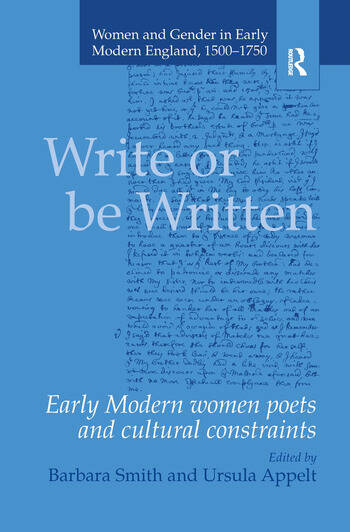 Although the field of early modern women's studies has blossomed in recent years, little attention has been paid to women poets of the period. This new collection is specifically designed to fill the gap, applying new critical methodologies and theories to this group of early modern writers. Write or Be Written also contributes to ongoing debates about canonicity, periodicity, disciplinarity, and the construction of knowledge. The essays in this volume reflect today's sophisticated critical thinking, and represent a broad range of approaches and methodologies. Topics covered include contextualizing the self; female discursive strategies; religious discourses and gender; writing a female space; negotiating power and desire; female writing and the marketplace/publishing; and revisions of male-dominated poetic conventions and traditions.

'...a useful volume of essays...All academic collections.' Choice '... this collection marks the growth and increasing sophistication of early modern women's studies, and is thus a welcome addition to the field.' Sixteenth Century Journal 'This collection is well thought out and the essays will provide springboards for further research within this field.' Modern Language Review '... the essays are well researched and presented, ushering in more sophisticated theoretical explorations of the subjects and their poetry than has sometimes been attempted in early works on women from the era... Many of the contributors make unique observations on the women's writing, drawing together texts and contexts in original ways... a useful addition to Renaissance and seventeenth-century literary and women's studies collections.' Renaissance Forum