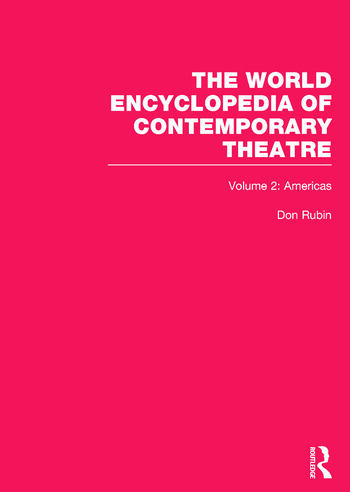 The second volume of the World Encyclopedia of Contemporary Theatre covers the Americas, from Canada to Argentina, including the United States. Entries on twenty-six countries are preceded by specialist introductions on Theatre in Post-Colonial Latin America, Theatres of North America, Puppet Theatre, Theatre for Young Audiences, Music Theatre and Dance Theatre.
The essays follow the series format, allowing for cross-referring across subjects, both within the volume and between volumes.
Each country entry is written by specialists in the particular country and the volume has its own teams of regional editors, overseen by the main editorial team based at the University of York in Canada headed by Don Rubin.
Each entry covers all aspects of theatre genres, practitioners, writers, critics and styles, with bibliographies, over 200 black & white photographs and a substantial index. This is a unique volume in its own right; in conjunction with the other volumes in this series it forms a reference resource of unparalleled value.

'I recommend it for large specialist collections.' - Reference Reviews

'Don Rubin as general editor and author of the first two introductory chapters (the second with Carlos Solorzano) has created a unique guide to contemporary theatre in the Americas, and with its many photographs and bibliographies, an essential resource for drama students and teachers.' - Times Higher Education Supplement, 26 Feb, 1999

'Writers from almost every nation on earth profile native expressions of music, dance, and puppet an dramatic theater since 1945 and comment on trends in design, training, criticism, and scholarship, in six insightful, inclusive, and entertaining volumes.' New York Public Library named The World Encyclopedia of Contemporary Theatre, Six-Volume Set as one of their Best of Reference selections, April 2002