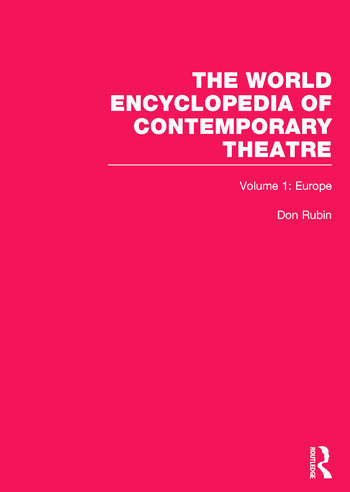 The World Encyclopedia of Contemporary Theatre:Europe covers theatre since World War II in forty-seven European nations, including the nations which re-emerged following the break-up of the former USSR, Czechoslovakia and Yugoslavia. Each national article is divided into twelve sections - History, Structure of the National Theatre Community, Artistic Profile, Music Theatre, Theatre for Young Audiences, Puppet Theatre, Design, Theatre, Space and Architecture, Training, Criticism, Scholarship and Publishing and Further Reading - allowing the reader to use the book as a source for both area and subject studies.

Don Rubin is Professor in the Department of Theatre at the University of York, Ontario.

`It should ... be purchased straight away as a ready reckoner of contemporary stage practice by every festival and theatre that has international dealings. Meanwhile any student or theatre-goer looking either for a starting point for exploration or to put foreign theatre in its context instead of just another novelty item in a festival programme should at the very least urge their local library to get hold of a copy.' - Theatre Scotland

`The first volume of the World Encyclopedia of Contemporary Theatre is a wonderfully rich source of theatrical information. Don Rubin and his many collaborators deserve resounding applause for pulling together such a remarkable and useful survey, which represents European theatre with a good deal of accuracy; as multifarious, unruly, discontinuous, full of escape routes to places never before imagined.' - Times Higher Education Supplement

'Writers from almost every nation on earth profile native expressions of music, dance, and puppet an dramatic theater since 1945 and comment on trends in design, training, criticism, and scholarship, in six insightful, inclusive, and entertaining volumes.' New York Public Library named The World Encyclopedia of Contemporary Theatre, Six-Volume Set as one of their Best of Reference selections, April 2002