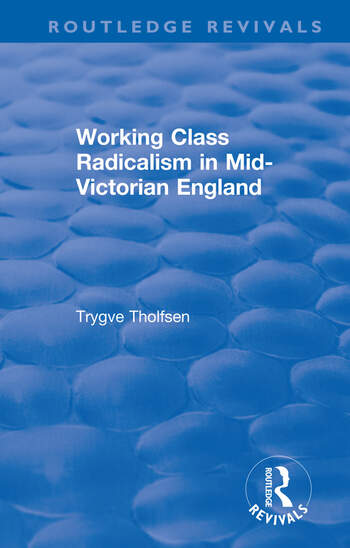 Originally published in 1976, Working Class Radicalism in Mid-Victorian England examines working-class radicalism in the mid-Victorian period and suggests that after the fading of Chartist militancy the radical tradition was preserved in a working-class subculture that enabled working men to resist the full consolidation of middle-class hegemony. The book traces the growth of working-class radicalism as it developed dialectically in confrontation with middle-class liberal ideology in the generation after Waterloo. Intellectual forces were of central importance in shaping the character of the working-class Left and the Enlightenment, in particular, as the chief source of ideological weapons that were turned against the established order. The Enlightenment also provided the intellectual foundations of the middle-class ideology that was directed against the incipient threat of popular radicalism. The book notes that the same intellectual forces that entered into the first half of the nineteenth century also shaped the value system that provided the foundations of mid-Victorian urban culture. These forces also contributed to the rapprochement between working-class liberalism, bringing latent affinities to the surface. It is also emphasised, however, that inherited ideas and traditions exercised their influence in interaction with the structure of power and status.

2. The Genesis of Working-Class Radicalism

3. The Challenge of Working-Class Radicalism