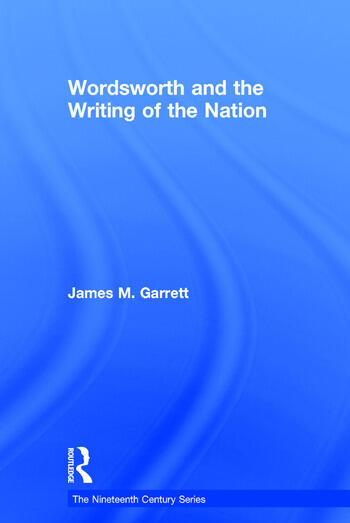 Wordsworth and the Writing of the Nation

Shedding fresh light on Wordsworth's contested relationship with an England that changed dramatically over the course of his career, James Garrett places the poet's lifelong attempt to control his literary representation within the context of national ideas of self-determination represented by the national census, national survey, and national museum. Garrett provides historical background on the origins of these three institutions, which were initiated in Britain near the turn of the nineteenth century, and shows how their development converged with Wordsworth's own as a writer. The result is a new narrative for Wordsworth studies that re-integrates the early, middle, and late periods of the poet's career. Detailed critical discussions of Wordsworth's poetry, including works that are not typically accorded significant attention, force us to reconsider the usual view of Wordsworth as a fading middle-aged poet withdrawing into the hills. Rather, Wordsworth's ceaseless reworking of earlier poems and the flurry of new publications between 1814 and 1820 reveal Wordsworth as an engaged public figure attempting to 'write the nation' and position himself as the nation's poet.

'Moving fluently between Wordsworth’s poetry and its cultural contexts, this splendidly intelligent study analyzes Wordsworth’s lifelong effort to construct and maintain a public persona, and helps us understand how and why he was able to become an exemplary national poet in the decades following his death. Capaciously literate and theoretically sophisticated, Garrett’s book should be read not just by anyone interested in Wordsworth, but by anyone interested in how nations are imagined.' Marc Redfield, Claremont Graduate University, USA ’Including a meticulous analysis of Wordsworth's less celebrated poems, Garrett's research may also be of interest to those Wordsworthians interested in that aspect of his craft which draws upon insights derived from seventeenth-century British empiricism, as Garrett's foregrounding of Wordsworth's classification modus operandi sheds additional light on his fascination with phenomena as appropriate content for his poetry.’ BARS Bulletin ’Garrett's unique approach yields fresh insights into the complex relationship between a nascent national and poetic self-consciousness, their convergence, and subsequent transformations.’ Modern Language Review ’... an engaging and thought provoking approach to the poet’s work, questioning the dominant image of a writer whose powers declined precipitously after 1807, and suggesting a number of ways in which a reconsideration of the later work - including, in particular, the work of cataloguing and publishing - could enrich our understanding of both the poet and his historical moment.’ Notes and Queries ’Wordsworth and the Writing of the Nation builds a comprehensive account of a dynamic that operates on multiple levels both in Wordsworth’s poetry and in the empirical representations produced by his contemporaries. Garrett does an admirable job surveying territory pertaining to his topic, mapping its varied manifestations and interconnections, and defining the modalities wi

Wordsworth and the Writing of the Nation