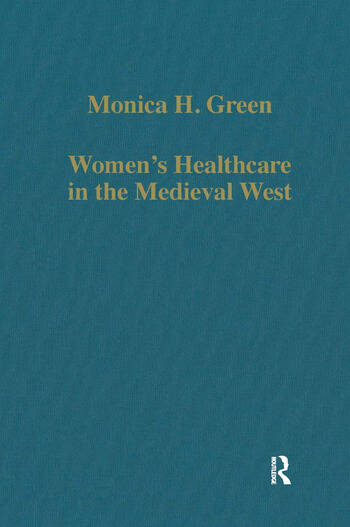 Women’s Healthcare in the Medieval West: Texts and Contexts

In this collection of seven major essays (one of them published here for the first time), Monica Green argues that a history of women's healthcare in medieval western Europe has not yet been written because it cannot yet be written - the vast majority of texts relating to women's healthcare have never been edited or studied. Using the insights of women's history and gender studies, Green shows how historians need to peel off the layers of unfounded assumption and stereotype that have characterized the little work that has been done on medieval women's healthcare. Seen in their original contexts, medieval gynecological texts raise questions of women's activity as healthcare providers and recipients, as well as questions of how the sexual division of labor, literacy, and professionalization functioned in the production and use of medical knowledge on the female body. An appendix lists all known medieval gynecological texts in Latin and the western European vernacular languages.

Contents: Introduction; Historical questions and methodologies: Women's medical practice and health care in medieval Europe; Documenting medieval women's medical practice; Identifying the texts: The De genecia attributed to Constantine the African; Obstetrical and gynecological texts in Middle English; The development of the Trotula; Exploring the contexts: 'Traittié tout de menÃ§onges': the Secrés des dames, 'Trotula', and attitudes towards women's medicine in 14th- and early 15th-century France; The possibilities of literacy and the limits of reading: women and the gendering of medical literacy; Appendix: Medieval gynecological literature: a handlist; Bibliography; Indices.

Prize: Winner of the 2004 John Nicholas Brown Prize from the Medieval Academy of America Prize: Nominated for the History of Science Society's History of Women in Science Prize, 2003 'Monica Green has established an international reputation for work on medieval women's health care which effortlessly combines meticulous scholarship with stimulating ideas...It is therefore very valuable to have a number of her most important essays on the recovery and interpretation of medieval medicine available in one volume... Thanks to Green's work, the medieval medical world is a far more clear, but also more varied, landscape than it was before; medical, social, and gender historians will find her a reliable and always stimulating guide.' Medical History 'Green's book is most successful in its uncompromising quest for objective facts about premodern women's medical practice.... anyone embarking on research into medieval medicine or the history of women in medicine would do well to start here....this book assembles 25 years of scholarly research. Green has done more than achieve her goal of "clearing the land" - she has mapped out many of its dead ends; unearthed, cleaned, and repaired numerous buried treasures; and laid the foundation for an observation post on to a Western medical system completely different from our own.' Perspectives in Biology and Medicine 'M. Green is practically a pioneering figure in this very complicated field to which she has dedicated all her research for many years, to the point of becoming its undisputed authority.' Bulletin Codicologique 'This collection of Monica Green's essays on women's health care in the Middle Ages represents the finest scholarship being produced today in the history of medieval medicine... a treasure trove of information... accompanied by fresh interpretive insights... Green (...) brings together medieval medical history and women's history in a truly masterful way.' Isis 'Those already familiar with Monica Green's rigorous and searching scholarship will undoubtedly welcome this compilation, which both collects together various existing articles from a wide range of publications and offers two entirely new contributions to the study of women in medieval healthcare. Those as yet unfamiliar with Green's work, but with an interest in past intersections of gender and medicine, will now be able to remedy that deficiency more easily and completely than hitherto. So there are benefits for all here... An invaluable resource... new materials and new perspectives, in terms of both scholarly thoroughness and flexibility, is well exemplified (...) by this volume.' Social History of Medicine '... establishes a new research paradigm on which future research will be based... Green is a graceful and even witty writer, making her scholarly prose a real joy to read.' Constance Brittain Bouchard et al

Women’s Healthcare in the Medieval West: Texts and Contexts