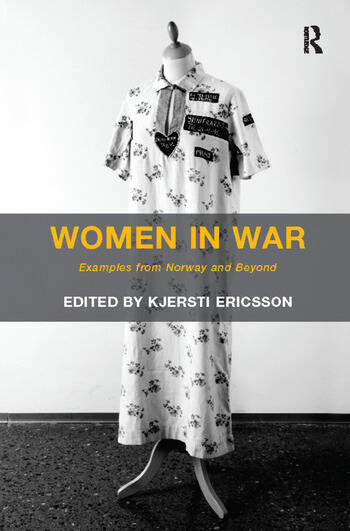 Women in War: Examples from Norway and Beyond

This book examines what happens to women and gender relations in times of upheaval. The experience of Norway during World War II, with some visits to other parts of the world as well, is used to demonstrate general, gendered issues that are actualized in wars both past and present.

The authors explore whether gendered cultural conceptions influence the way war is remembered and represented, both collectively and individually. The collection discusses the various roles of women during the war from resistance fighter to `German tart’ and how they were dealt with and treated in the aftermath. The chapters examine the position of Jewish victims of persecution, foreign female labourers and gay men, as well as the gendered response exhibited by the courts in post-war trials of female state police employees. The book concludes by following the struggle to bring women’s role in war and peacebuilding onto the international agenda.

This book will be of interest to students and scholars in the field of criminology, as well as peace and conflict studies, political science, sociology of law, history, social work, social pedagogy, psychology and gender studies.

Kjersti Ericsson is a professor emerita of criminology at the Department of Criminology and Sociology of Law at the University of Oslo. She has written extensively on gender issues and on marginalized children.

‘This book makes it clear both why Norway offers an important case study and why greater attention should be paid to women’s experiences in war. The interdisciplinary nature of the collection is striking, and chimes well with developments throughout the academy. The book is engaging, clearly written and well-structured. Each chapter whets the appetite for more.’

‘This book not only makes women’s war experience more visible, it also convincingly demonstrates how the female body and sexuality become a combat zone, cut across categories like victim and perpetrator, resistance and collaboration, agency and victimhood, silence and propaganda. Easy to read but hard to forget.’

‘A fascinating and timely collection that applies distinctive disciplinary lenses from criminology and international relations to the theme of women and war. The book uses the focus on Norway as a single national context to illuminate key debates around agency, including complicity and resistance, sexual exploitation and political choices, on the one hand, and memory and history, and their gendered treatment on the other.’

Women in War: Examples from Norway and Beyond