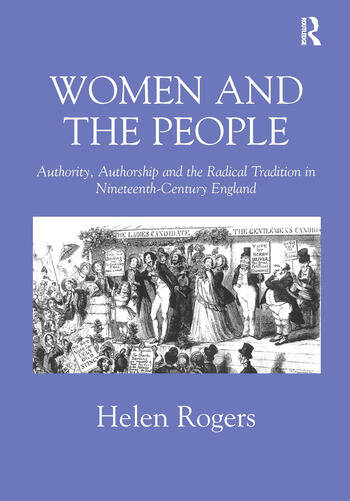 Women and the People: Authority, Authorship and the Radical Tradition in Nineteenth-Century England

Based on extensive new research investigating the range of women’s involvement in early nineteenth-century popular politics, mid-Victorian reform and the women’s movements of the late century, Women and the People makes an original intervention in the historiography of the radical tradition by exploring the interconnections of populism, liberalism and feminism. Attending to authorship, the study argues that the representational forms adopted by radicals were as important as the content of what they said in shaping their self-perception, their construction of others, and the reception of their ideas. In fiction, poetry and autobiography, as well as in political writing, speeches and journalism, women reworked radical conventions and imagined new models of political identity, participation and authority. Though, in general, radicals appealed to ’the people’, women were often positioned as the suffering objects of reform rather than as the agents of change. By showing how they challenged or reinforced these conceptions of ’women’ and ’the people’, the book contends that radical women invoked alternative communities of sex, class and nation, and helped to remake and discipline the political sphere, as they strove to make it their own.

'... no-one who seeks henceforward to consider the significance of class or of gender for understanding nineteenth century radical politics will be able to do so adequately without engaging with this important book.' Nineteenth Century Contexts '... Helen Rogers' Women and the People [is] the most important work in this area since Anna Clark's The Struggle for the Breeches (1995)... the book can be recommended as a serious attempt to build a sophisticated cultural history that allows for the agency of representation but also reconstructs the material reality of everyday life in the past.' Gender & History

Women and the People: Authority, Authorship and the Radical Tradition in Nineteenth-Century England