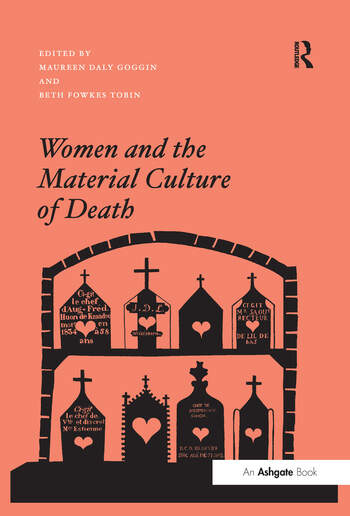 Women and the Material Culture of Death

Examining the compelling and often poignant connection between women and the material culture of death, this collection focuses on the objects women make, the images they keep, the practices they use or are responsible for, and the places they inhabit and construct through ritual and custom. Womenā€™s material practices, ranging from wearing mourning jewelry to dressing the dead, stitching memorial samplers to constructing skull boxes, collecting funeral programs to collecting and studying diseased hearts, making and collecting taxidermies, and making sculptures honoring the death, are explored in this collection as well as womenā€™s affective responses and sentimental labor that mark their expected and unexpected participation in the social practices surrounding death and the dead. The largely invisible work involved in commemorating and constructing narratives and memorials about the dead-from family members and friends to national figures-calls attention to the role women as memory keepers for families, local communities, and the nation. Women have tended to work collaboratively, making, collecting, and sharing objects that conveyed sentiments about the deceased, whether human or animal, as well as the identity of mourners. Death is about loss, and many of the mourning practices that women have traditionally and are currently engaged in are about dealing with private grief and public loss as well as working to mitigate the more general anxiety that death engenders about the impermanence of life.

Maureen Daly Goggin is Professor and Chair in the Department of English, Arizona State University, USA.

Beth Fowkes Tobin is Professor of English and Women's Studies at the University of Georgia, USA.

'Women and the Material Culture of Death is a book that is at once ambitious, compelling and poignant. The nineteen, cross-disciplinary, generously illustrated essays that comprise this collection reveal the hidden history of women's role in mourning the dead through a range of material practices from the early modern period to the present. As such, this book offers a vital contribution to the fields of gender and material culture studies as well as to the history of death. More than that, in an age in which the business of dying has been thoroughly commercialized, its analysis of the lives of women of the past offers us new ways of imagining our responses to death in the future.' Jennie Batchelor, University of Kent, UK

'Proffer[s] such a formidable range of materials and approaches that it would be difficult to embrace its entirety in a review. However, this diversity definitely contributes to the book's success overall. This collection marks a welcome addition to the already strong Ashgate series examining women and material culture that is edited by Maureen Daly Goggin and Beth Fowkes Tobin.' West 86th

'Women and the Material Culture of Death presents a fine set of essays ... collectively, they assist to provide the background required to gain a better understanding of what death and its associated cultural artefacts mean.' Church Monument

Women and the Material Culture of Death