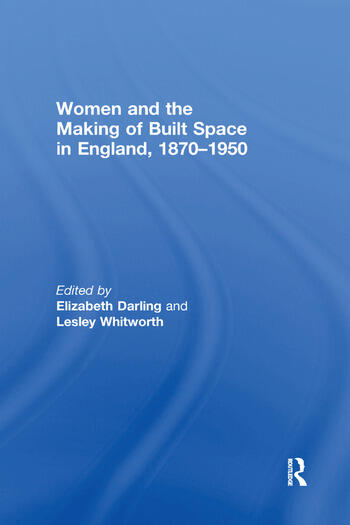 This interdisciplinary collection explores the relationships between women and built space in England between the 1870s and the 1940s. Historians working in cultural, literary, architectural, urban, design, labour, and social history approach the topic through case studies of often neglected organisations, individuals, practices and initiatives. Included are East End rent collectors, tenants, diarists and correspondents, the All-Europe House, the Women's Co-operative Guild, the Housewives Committee of the Council of Industrial Design, provincial and metropolitan exhibitors, and activists of varying kinds. Moving beyond the study of buildings and their designers, the volume considers the making of space in its broadest sense, from the production of discourses to the consumption of domestic appliances and the performance of roles as diverse as social reformers, committee members and homemakers. It thereby demonstrates that women made a significant contribution to the creation of modern built environments in both public and private spheres.

Contents: Introduction: Making space and re-making history, Elizabeth Darling and Lesley Whitworth; Gender, citizenship and the making of the modern environment, Helen Meller; The Hill sisters: cultural philanthropy and the embellishment of lives in late-19th century England, Anne Anderson and Elizabeth Darling; 'A novelty among exhibitions': the loan exhibition of women's industries, Bristol, 1885, Emma Ferry; 'Everything whispers of wealth and luxury': observation, emulation and display in the well-to-do late-Victorian home, Trevor Keeble; Women rent collectors and the rewriting of space, class and gender in East London, 1870-1900, Ruth Livesey; Gendering the politics of the working woman's home, Karen Hunt; 'The house that is a woman's book come true': the all-Europe house and 4 women's spatial practices in inter-war England, Elizabeth Darling; 'Part-time practice as before': the career of Sadie Speight, architect, Jill Seddon; Workshops fit for homeworkers: the women's co-operative guild and housing reform in mid-20th-century Britain, Gillian Scott; The Housewives' Committee of the Council of Industrial Design: a brief episode of domestic reconnoitring, Lesley Whitworth; Bibliography; Index.

Elizabeth Darling is a Senior Lecturer in the Department of History of Art, Oxford Brookes University, UK.

'Women and the Making of Built Space brings women into new relationships with the built environment, in vivid vignettes of class, architectural and modern history.' Sally Alexander, University of London

’Ultimately, this is a readable collection about housing and the contribution of women to it. It is very good at surveying the small contributions of often anonymous women to housing reform between 1870 and 1950 and it points to areas that might be further developed by historians of material culture.’ Labour/Le Travail

’A strength of this collection is its fresh approach to the question of the separation of this public world from the sphere of the home. The volume offers a new take on the way in which women intervened in the discourses and organizational bodies of the state to reshape the fabric of domestic space.’ Victorian Studies