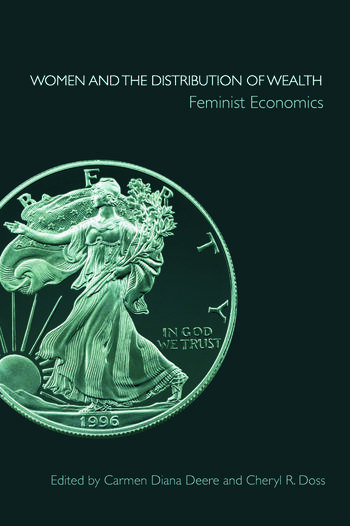 Women and the Distribution of Wealth: Feminist Economics

Gender is rarely taken into account in analyses of the distribution of wealth, and the evidence on women’s ownership of wealth is surprisingly scarce. It is important to examine the distribution of wealth by gender because gender is one important dimension along which inequality exists. In addition, women and men may use their wealth, and the income that it generates, differently and this may have consequences for household well-being and the larger society. Wealth also is related to power – both economic and political power – and asset ownership is related to increased empowerment and well-being.

This collection focuses on documenting the gender distribution of wealth and addressing how and why it matters within a variety of geographical contexts. Including historical, comparative, analytical, and policy-oriented work, the essays:

This book was previously published as a special issue of Feminist Economics.

1. The Gender Asset Gap: What Do We Know and Why Does it Matter?  2. Qui Bono?: The 1870 British Married Women’s Property Act, Bargaining Power, and the Distribution of Resources Within Marriage  3. Crippled Capitalists: The Inscription of Economic Dependence and the Challenge of Female Entrepreneurship in Nineteenth Century America  4. 'The Widow, the Clergyman, and the Reckless': Women Investors in England, 1830-1914  5. Gender, Marriage, and Asset Accumulation in the United States  6. The Wealth of Single Females: Marital Status and Parenthood in the Asset Accumulation of Young Baby Boomers in the United States  7. Moving beyond the Gender Wealth Gap: On Gender, Class, Ethnicity, and Wealth Inequalities in the UK  8. Household Bargaining Over Wealth and the Adequacy of Women’s Retirement Incomes in New Zealand  9. Assets in Intrahousehold Bargaining among Women Workers in Colombia’s Cut-flower Industry  10. Joint Titling: A Win-Win Policy?: Gender and Property Rights in Urban Informal Settlements in India

Cheryl R. Doss is currently the Director of Graduate Studies for the MA program in International Relations, the Associate Chair of the International Affairs Council and a Lecturer in Economics at Yale University.

Women and the Distribution of Wealth: Feminist Economics