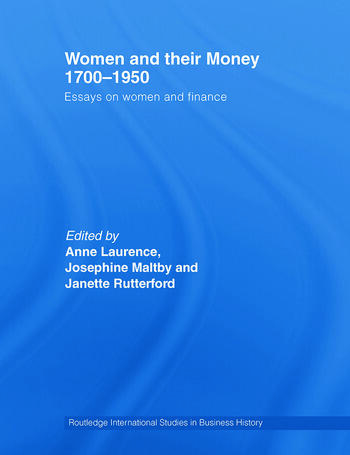 This book examines women's financial activity from the early days of the stock market in eighteenth century England and the South Sea Bubble to the mid-twentieth century. The essays demonstrate how many women managed their own finances despite legal and social restrictions and show that women were neither helpless, incompetent and risk-averse, nor were they unduly cautious and conservative. Rather, many women learnt about money and made themselves effective and engaged managers of the funds at their disposal.

The essays focus on Britain, from eighteenth-century London, to the expansion of British financial markets of the nineteenth century, with comparative essays dealing with the US, Italy, Sweden and Japan. Hitherto, writing about women and money has been restricted to their management of household finances or their activities as small business women. This book examines the clear evidence of women's active engagement in financial matters, much neglected in historical literature, especially women's management of capital.

10. To Do the Right Thing: Gender, Wealth, Inheritance and the London Middle Class David Green

11. Women and Wealth in Fiction in the Long Nineteenth Century 1800-1914 Josephine Maltby and Janette Rutterford

13. Female Investors Within the Scottish Investment Trust Movement in the 1870s Claire Swan

17. "The Principles of Sound Banking and Financial Noblesse Oblige": Women's Departments in U.S. Banks at the Turn of the Twentieth Century Nancy Robertson

18. Women, Money and the Financial Revolution: A Gender Perspective on the Development of the Swedish Financial System, c.1860–1920 Tom Petersson

20. The Transformation From "Thrifty Accountant" to "Independent Investor": The Changing Relationship of Japanese Women and Finance Under the Influence of Globalization? Naoko Komori