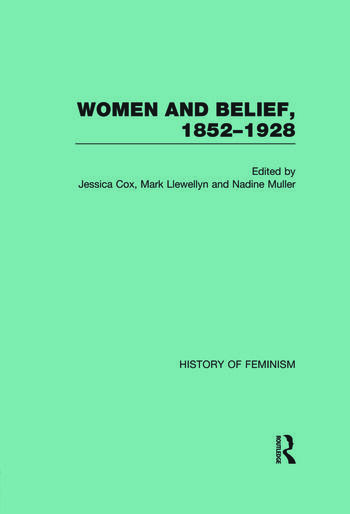 Co-published by Routledge and Edition Synapse

Over recent years, research into religious belief during the Victorian period and the early twentieth century has grown in diversity and importance. The centrality of faith-based discourses to women of the period has long been recognized by scholars in the field. But until now relatively little significance has been attached to the fundamental relationship between women’s faith and women’s rights. This new title in the History of Feminism series remedies that omission. Women and Belief, 1852–1928 is a six-volume collection of primary materials covering a wide range of opinions about women, their self-identity, and the combination of their spiritual and political beliefs.

Addressing the most debated aspects of women’s religious, social, cultural, and political rights, the collection adopts an historical overview of the period and provides an authoritative representation of the wide body of literature written by and about women’s faith. Beginning with an example of how religious discourse provided a model for acceptable female behaviour and a satirical take on women’s rights and spiritualism and ending with an economist’s psychoanalytic study of female belief from 1928, Women and Belief, 1852–1928 provides a unique collection of different viewpoints. It brings together the work of women writers, theologians, philosophers, and economic and cultural historians to illustrate the multiplicity of voices and opinions on the issues of suffrage and religious faith. This diversity is equally reflected in the broad geographical coverage of the collection which draws on works not only from the United Kingdom and United States but also includes materials from Canada and India, and moves beyond the Christian into the spheres of theosophy, Islam, Hinduism, Buddhism, and Judaism. The gathered materials include works of non-fiction, poetry, analytical works, satires, pamphlets, sermons, spiritual (auto)biography, and periodical articles.

Making readily available such materials—which are currently very difficult for scholars, researchers, and students across the globe to locate and use—Women and Belief, 1852–1928 is a veritable treasure-trove. The gathered works are reproduced in facsimile, giving users a strong sense of immediacy to the texts and permitting citation to the original pagination. And with detailed and comprehensive introductory, biographical, and contextual material in each volume illustrating the ways in which the materials chart the gradual evolution of feminist thinking about belief, spirituality, and faith that directly fed into the emerging discourses of political and social rights for women, the collection is destined to be welcomed as a vital reference and research resource.

3. Fred Folio, A Book for the Times: Lucy Boston, or, Woman’s Rights and Spiritualism: Illustrating the Follies and Delusions of the Nineteenth Century (New York: J. C. Derby, 1855) (406pp. including illustrations)

4. William Landels, Woman’s Sphere and Work, Considered in the Light of Scripture: A Book for Young Women (London: James Nisbet and Co., 1859) (240pp.)

5. William Kay, The Influence of Christianity on the Position and Character of Woman: A Sermon (Calcutta, 1859) (55pp.)

12. J. G. Mandley, Woman Outside Christendom: An Exposition of the Influence Exerted by Christianity on the Social Position and Happiness of Women (London, 1880) (159pp.)

13. Elizabeth Machardie, What is Spiritualism? A Paper Read at the Annual Conference of the Christian Women’s Union, Held in Glasgow (London, 1884) (16pp.)

30. Chapman Cohen, Woman and Christianity: The Subjection and Exploitation of a Sex (London: The Pioneer Press, 1919) (96pp.)