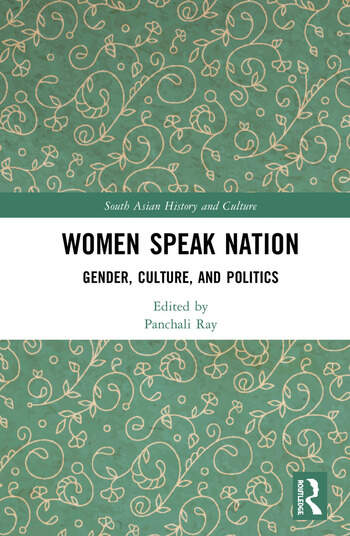 Women Speak Nation underlines the centrality of gender within the ideological construction of nationalism. The volume locates itself in a rich scholarship of feminist critique of the relationship between political, economic, cultural, and social formations and normative gendered relations to try and understand the cross-currents in contemporary feminist theorizing and politics.

The chapters question the gendered depictions of the nation as Hindu, upper caste, middle class, heterosexual, able-bodied Indian mother. The volume also brings together interviews and short essays from practitioners and activists who voice an alternative reimagining of the nation.

The book will be of great interest to scholars and researchers of gender, politics, modern South Asian history, and cultural studies.

PART I Gender, nation, and nationalism

2 The Verma Committee report, 2013: notes on nation, gender, and crime

3 The gendered nation: to be recoded or rejected?

PART II Class-caste-community: negotiating the secular, the liberal, and the modern

4 Shia women and their ‘place-making’: gendered agency in the Muharram gatherings in Kolkata

5 Speaking in a different voice: Dalit women writing in Bengali

6 Dance of dissent: dancing Tagore in the age of nationalism

7 Towards reparative readings: reflections on feminist solidarities in a troubling present

9 ‘Their’ suicide letter: an exercise in reading that is always incomplete

12 Narratives from Bastar: an interview with Soni Sori

15 Tale of a Brahmin and a Shudrani

Panchali Ray is an independent researcher based in New Delhi, India. She is the author of Politics of Precarity: Gendered Subjects and the Health Care Industry in Contemporary Kolkata. Her areas of interest include labour, migration, violence, sexualities, and collective politics.