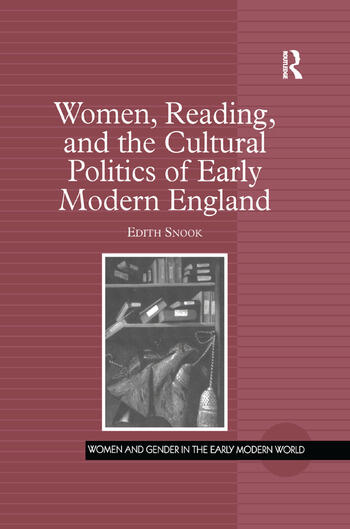 Women, Reading, and the Cultural Politics of Early Modern England

A study of the representation of reading in early modern Englishwomen's writing, this book exists at the intersection of textual criticism and cultural history. It looks at depictions of reading in women's printed devotional works, maternal advice books, poetry, and fiction, as well as manuscripts, for evidence of ways in which women conceived of reading in sixteenth- and early seventeenth-century England. Among the authors and texts considered are Katherine Parr, Lamentation of a Sinner; Anne Askew, The Examinations of Anne Askew; Dorothy Leigh, The Mothers Blessing; Elizabeth Grymeston, Miscelanea Meditations Memoratives; Aemelia Lanyer, Salve Deus Rex Judaeorum; and Mary Wroth, The First Part of the Countess of Montgomery's Urania. Attentive to contiguities between representations of reading in print and reading practices found in manuscript culture, this book also examines a commonplace book belonging to Anne Cornwallis (Folger Folger MS V.a.89) and a Passion poem presented by Elizabeth Middleton to Sarah Edmondes (Bod. MS Don. e.17). Edith Snook here makes an original contribution to the ongoing scholarly project of historicizing reading by foregrounding female writers of the early modern period. She explores how women's representations of reading negotiate the dynamic relationship between the public and private spheres and investigates how women might have been affected by changing ideas about literacy, as well as how they sought to effect change in devotional and literary reading practices. Finally, because the activity of reading is a site of cultural conflict - over gender, social and educational status, and the religious or national affiliation of readers - Snook brings to light how these women, when they write about reading, are engaged in structuring the cultural politics of early modern England.

Contents: Introduction; Gendering the English Reformation: the vernacular reader in Anne Askew's Examinations and Katherine Parr's Lamentacion of a Synner; Dorothy Leigh, the 'Labourous Bee,' and the work of literacy in 17th-century England; A 'Wit's Camelion': Elizabeth Grymeston and the Catholic reader; Reading the passion among women: Aemelia Lanyer and Elizabeth Middleton; 'Onely a Cipher': reading and writing secrets in Lady Mary Wroth's The Countess of Montgomery's Urania; Selected bibliography; Index.

Edith Snook is Assistant Professor of English at the University of New Brunswick, Canada.

'Snook marshals startling and powerful interpretations of the works at hand... An impressively erudite, measured, and intelligent contribution to the field of early modern women’s studies.' Patricia Phillippy, Professor of English, Texas A&M University, and author of Women, Death and Literature in Post-Reformation England '... Snook's book has much to recommend it. Her introduction engages intelligently with the existing scholarship on early modern women's reading, and her discussions of Lanyers's Salve Deus Rex Judaeorum and Wroth's Urania should be required reading for all students of these texts. Her handling of gender politics is also pleasingly nuanced and historically sensitive; she ably resists the temptation to read women's texts as necessarily and straightforwardly transgressive. She is especially compelling in her analysis of visual images of women as readers...' Sharp News ’This book will be useful to scholars interested in how early modern women writers shaped their contemporary political discourses of religion, gender and education.’ Sixteenth Century Journal ’... the book is detailed and discerning and will be useful for both scholars and students alike.’ The Year's Work in English Studies ’... offers a compelling reassessment of women's participation within the history of reading... The excellence of Snook's carefully constructed study owes much to her methodology... Snook's readings are persuasive and insightful... Snook's study stands as a valuable contribution to the history of reading in sixteenth- and seventeeth-century England.’ University of Toronto Quarterly ’In a fine first book centered on women's representations of reading between 1540 and 1640, Edith Snook brings together two important fields within early modern studies: the history of reading and the study of women writers. ...carefully researched and clearly written... The great strengths of the book are its attentive readings of texts and images and its ste

Women, Reading, and the Cultural Politics of Early Modern England