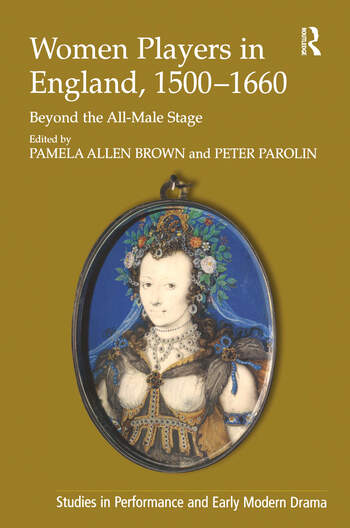 Offering evidence of women's extensive contributions to the theatrical landscape, this volume sharply challenges the assumption that the stage was 'all male' in early modern England. The editors and contributors argue that the pervasiveness of female performance affected cultural production, even on the professional London stages that used men and boys for women's parts. English spectators saw women players in professional and amateur contexts, in elite and popular settings, at home and abroad. Women acted in scripted and improvised roles, performed in local festive drama, and took part in dancing, singing, and masquing. English travelers saw professional actresses on the continent and Italian and French actresses visited England. Essays in this volume explore: the impact of women players outside London; the relationship between women's performance on the continent and in England; working women's participation in a performative culture of commerce; the importance of the visual record; the use of theatrical techniques by queens and aristocrats for political ends; and the role of female performance on the imitation of femininity. In short, Women Players in England 1500-1660 shows that women were dynamic cultural players in the early modern world.

'By looking off-stage to women in the wings and away from London to women in the provinces and on the continent, this important collection provides a compelling context for the puzzle about why there were no women on Shakespeare's stage.' Dympna Callaghan, Dean's Professor in the Humanities, Syracuse University, USA 'An engaging, stimulating and important collection of essays which offers both new research and the synthesis of fields often kept artificially apart....Brown and Parolin's collection will form a valuable context for future studies; it stamps its own mark on the field and changes it for the better.' Clare McManus, Lecturer in English, Queen's University Belfast ’The essays come packed with revelatory evidence gleaned from an impressive compilation of recent research--material that adds a sense of fresh discovery to the scrupulous historical examination and analyses...The text is enhanced by 28 illustrations and served well by a comprehensive index. This book will appeal to those exploring women's studies as well as to those probing early modern drama...Highly recommended.’ Choice '... each author explores his or her topic with rigor and extensive research... By reminding us that women 'acted on' English theater performance of the early modern period, this book effectively invites us to reconsider the gender-specific influences that hitherto have been neglected.' Renaissance Quarterly 'This thought-provoking collection of essays covers a huge amount of ground.' TLS ’...this volume reflects a profoundly important movement in early modern theatrical studies. The range of articles make it both methodologically and thematically an invaluable resource not only for scholars in the field of early modern theatre, but for anyone working in women's history. As the editors state, their 'approach strives to be extensive', and it certainly succeeds in this respect.’ Theatre Research International ’From having been close to invisible in represe