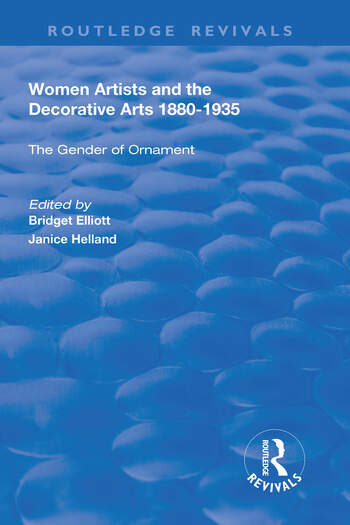 Women Artists and the Decorative Arts 1880-1935: The Gender of Ornament

This title was first published in 2002. To date, studies explaining decorative practice in the early modernist period have largely overlooked the work of women artists. For the most part, studies have focused on the denigration of decorative work by leading male artists, frequently dismissed as fashionably feminine. With few exceptions, women have been cast as consumers rather than producers. The first book to examine the decorative strategies of late nineteenth- and early twentieth-century women artists, Women Artists and the Decorative Arts concentrates in particular on women artists who turned to fashion, interior design and artisanal production as ways of critically engaging various aspects of modernity. Women artists and designers played a vital role in developing a broad spectrum of modernist forms. In these essays new light is shed on the practice of such well-known women artists as May Morris, Clarice Cliff, Natacha Rambova, Eileen Gray and Florine Stettheimer, whose decorative practices are linked with a number of fascinating but lesser known figures such as Phoebe Traquair, Mary Watts, Gluck and Laura Nagy.

'... a theoretically sound overview of the gendering of decoration... a timely addition to scholarship in the area of decorative arts... a valuable reference source for those interested in Modernism across the fields of architecture, design and fine arts...'

- Ailsa Boyd, Journal of the Scottish Society for Art History

'... a stimulating approach to a study of women's role, and their achievements, in the decorative arts... It is a pleasure to see such a refeshing and well-researched study, encompassing such a range of designers and makers and variety of art forms.'

- The Journal of William Morris Studies

Women Artists and the Decorative Arts 1880-1935: The Gender of Ornament