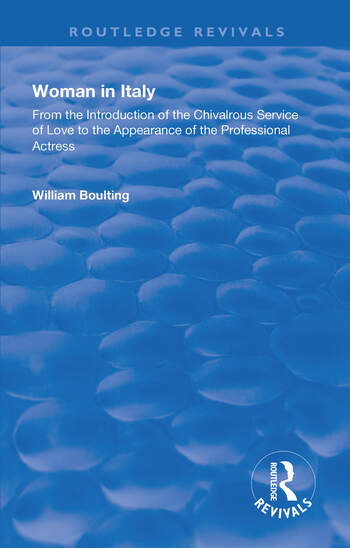 Woman in Italy: From the Introduction of the Chivalrous Service of Love to the Appearance of the Professional Actress

First published in 1910, this study in social evolution from the 13th to the 16th century functioned as a successor to Jacob Burckhardt’s The Civilisation of the Renaissance in Italy (1860). The author developed Burckhardt’s idea of studying continuous trends over time whilst challenging his idea that Early Modern women enjoyed extraordinary freedom in comparison to their Medieval predecessors. Boulting contrasts the idealization of women with real women at home and in life, portraying women as expanding from protective bondage due to economic progress alongside what contemporary scholars saw as the degeneration of the Catholic Faith during and following the Counter Reformation. He explores various roles of Renaissance women including maidens, married women, housewives, motherhood, widowhood, styles of dress, nuns, saints, courtesans and academics. In doing so, Boulting hoped to demonstrate how very substantial yet how wholly partial the emergence of women was during this Late Medieval and Early Modern period and that this coincided with the complete amelioration of humanity and an increase in kindliness and sense of duty among both men and women.

Part 1. The Idealization of Woman. 1. The Chivalrous Service of Love. 2. The Doctrine of Celestial Love and its Courtly Observance. Part 2. The Real Woman at Home and in Life. 1. The Maiden. 2. Betrothal. 3. Marriage. 4. The Wedded Pair. 5. Passion and Flirtation. 6. The Woman at Home: the House. 7. The Woman at Home: the Housewife; Servants and Slaves. 8. The Mother. 9. Widowhood, Sickness, Death, and Burial. 10. Stir, Perils and Amusements of Life. 11. Dress and Adornment. 12. Religion, Superstition, and Deeds of Piety. 13. Canonized and Beatified Women. 14. The Nun. 15. Morals. 16. The Courtesan. 17. The Constraint and Partial Affranchisement of a Sex: Legal Status, Liberal Education, and Economic Independence. 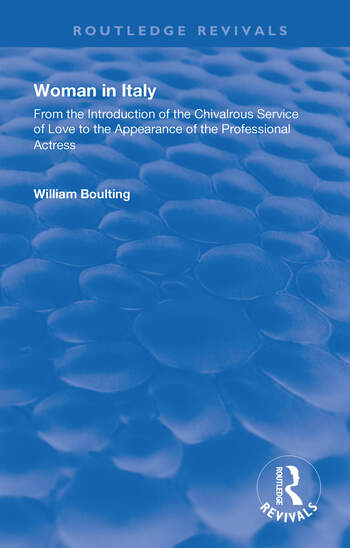 Woman in Italy: From the Introduction of the Chivalrous Service of Love to the Appearance of the Professional Actress