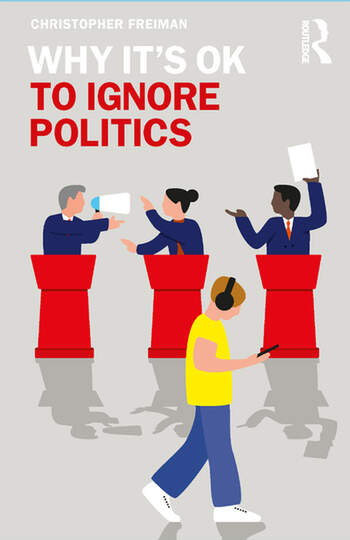 Why It's OK to Ignore Politics

Do you feel like you’re the only person at your office without an "I Voted!" sticker on Election Day? It turns out that you're far from alone – 100 million eligible U.S. voters never went to the polls in 2016. That’s about 35 million more than voted for the winning presidential candidate.

In this book, Christopher Freiman explains why these 100 million need not feel guilty. Why It’s OK to Ignore Politics argues that you’re under no obligation to be politically active. Freiman addresses new objections to political abstention as well as some old chestnuts ("But what if everyone stopped voting?"). He also synthesizes recent empirical work showing how our political motivations distort our choices and reasoning. Because participating in politics is not an effective way to do good, Freiman argues that we actually have a moral duty to disengage from politics and instead take direct action to make the world a better place.

1. In Pursuit of Political Wisdom

3. The Costs and Benefits of Political Participation

5. Political Abstention and Complicity in Injustice

6. The Morality of the Message

Christopher Freiman is Associate Professor of Philosophy at William & Mary. He is the author of Unequivocal Justice (2017).

Why It's OK to Ignore Politics