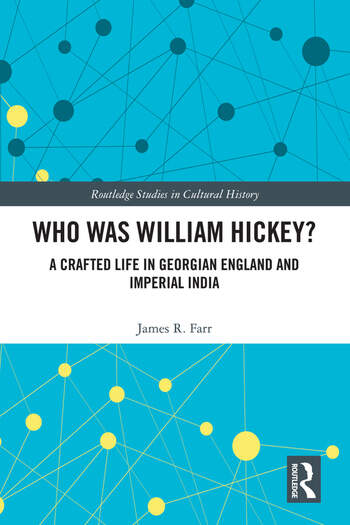 Who Was William Hickey?: A Crafted Life in Georgian England and Imperial India

This book analyzes an example of life-writing, an autobiography that was written in the early nineteenth century and will appeal to readers of many disciplines who are interested in understanding the interconnectedness of memory, textual narrative, and ideas of selfhood. Moreover, this book reasserts the importance of the individual in history. It explains how personal narratives reveal the individual as a purposeful social actor pursuing particular objectives, but framed by cultural and social contexts, in this case by eighteenth-century London and Imperial India. The author of this autobiography, William Hickey, projects a sense of self formed by a combination of an interiorized self-consciousness (an awareness of himself as an autonomous individual, although not one prone to deep self-reflection) and a socially-turned self-fashioning. Like so many autobiographers of his time, Hickey’s self is realized through the production of a narrative, his self fixed and defined through the act of writing. As he wrote his memoirs, Hickey was engaged in purposeful textual representation to satisfy his perceived sense of place in that culture (above all, as a gentleman) while tacitly reflecting the constraints of that culture imposed upon the form and content of the text.

Part I: A Life Remembered

2. "Dissipation and Folly": The Young Libertine

3. Into the Empire: India and Jamaica

4. London Again, Then Back to India

5. A Professional Gentleman in Calcutta, and the Return to "Dear Old England"

James R. Farr is the Germaine Seelye Oesterle Professor of History at Purdue University. He has published widely in Early Modern European History, notably Artisans in Europe, 1300-1914, A Tale of Two Murders: Passion and Power in Seventeenth Century France, and The Work of France: Labor and Culture in the Early Modern Era, 1300-1800.

Who Was William Hickey?: A Crafted Life in Georgian England and Imperial India