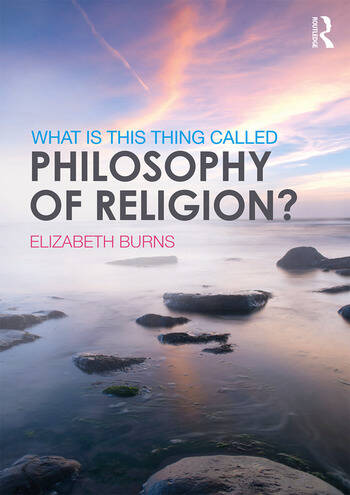 What is this thing called Philosophy of Religion?

What is this thing called Philosophy of Religion? grapples with the core topics studied on philosophy of religion undergraduate courses including:

In addition to the in-depth coverage of the key themes within the subject area Elizabeth Burns explores the topics from the perspectives of the five main world religions, introducing students to the work of scholars from a variety of religious traditions and interpretations of belief.

What is this thing called Philosophy of Religion? is the ideal introduction for those approaching the philosophy of religion for the first time, containing many helpful student-friendly features, such as a glossary of important terms, study questions and further reading.

Chapter 1 – What is philosophy of religion?

Chapter 2 – Ways with words: The meaning of religious language

Chapter 4 – Personal and impersonal interpretations of the Divine

Chapter 9 – Arguments for the existence of the Divine: Cosmological arguments

Chapter 10 – Arguments for the existence of the Divine: Design arguments

Chapter 11 – Arguments for the existence of the Divine: Moral arguments

Chapter 12 – Arguments for the existence of the Divine: Arguments from religious experience

Chapter 13 – Arguments for the existence of the Divine: Ontological arguments

Chapter 14 – Arguments against belief in the Divine: The problem of evil

Chapter 15 – Arguments against belief in the Divine: The problem of divine hiddenness

Chapter 16 – Arguments against belief in the Divine: The problem of religious diversity

Appendix 3 – List of anthologies and their contents by topic

Reader in Philosophy of Religion and Programme Director for Bachelor of Divinity, University of London
London, , United Kingdom

What is this thing called Philosophy of Religion?