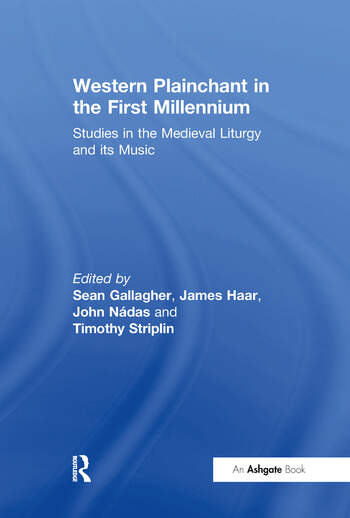 Western Plainchant in the First Millennium: Studies in the Medieval Liturgy and its Music

Taking up questions and issues in early chant studies, this volume of essays addresses some of the topics raised in James McKinnon's The Advent Project: The Later Seventh-Century Creation of the Roman Mass, the last book before his untimely death in February 1999. A distinguished group of chant scholars examine the formation of the liturgy, issues of theory and notation, and Carolingian and post-Carolingian chant. Special studies include the origins of musical notations, nuances of early chant performance (with accompanying CD), musical style and liturgical structure in the early Divine Office, and new sources for Old-Roman chant. Western Plainchant in the First Millenium offers new information and new insights about a period of crucial importance in the growth of the liturgy and music of the Western Church.

'The list of contributors is in itself almost a roll-call of the leading chant scholars, and their presence makes it superfluous to draw the attention of those interested in the subject to the book: there's no way they would miss it.' Early Music Review 'This volume provides a window onto the central questions being addressed by some of the most distinguished scholars working on western chant. Essential reading for specialists, it has plenty to offer the general reader.' Choir and Organ 'The essays compiled in Western Plainchant in the First Millenium are the beginning of an engagement with McKinnon's challenging ideas. This commendable [...] collection explores a number of methodologies, including manuscript studies, exegetical concerns of genre and liturgy, and problems of medieval music theory and chant analysis. Its breadth documents the state of the field, testifying to the depth and richness of chant studies... The sheer bounty and diversity of scholarship contained within Western Plainchant in the First Millenium is a fitting tribute to the life and work of James McKinnon.' Current Musicology

Western Plainchant in the First Millennium: Studies in the Medieval Liturgy and its Music