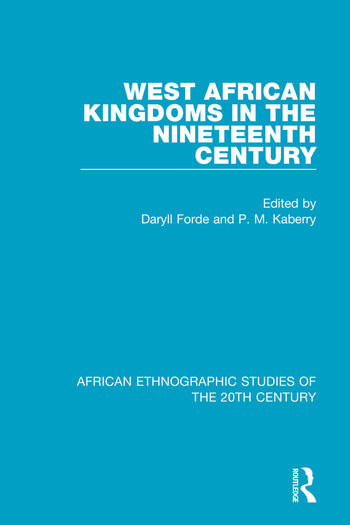 Originally published in 1967 this volume presents studies of 10 West African kingdoms which have played an important part in the economic, political and cultural life of the region. Ranging geographically from the kingdom of Benin in southern Nigeria to the Wolof kingdom of Kayor in Senegal, they inlcude the Oyo Yoruba, Dahomey, Hausa, Maradi, Kom in West Cameroon, the Mossi, Ashanti and Gonja and the Mende chiefdoms of Sierra Leone. Each outlines the historical origins and development of the kingdom and analyses its organization in the nineteenth century. It includes accounts of the economic basis and resources of the state and the significance of tribute and trade, of the social categories among its population, the administrarive machinery and communnications, the judicial and military organization and external relations. It also considers the importance of the ideology and rituals of kingship.

3. The Yoruba Kingdom of Oyo

4. The Kingdom of Dahomey

6. The Kingdom of Kom in West Cameroon

10. The Mende Chiefdoms of Sierra Leone

11. The Wolof Kingdom of Kayor