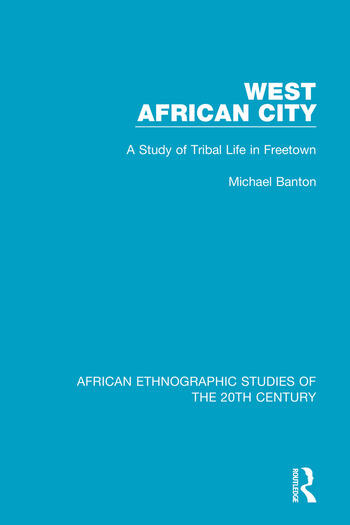 West African City: A Study of Tribal Life in Freetown

Originally published in 1957 this volume deals with the issue of large scale immigration into Freetown, Sierra Leone from the rural areas in the 1950s and the problems which arose as a result. It analyzes the way traditional social systems had to adjust to the demands of urban life and charts the growth of Freetown from its foundation in the 18th Century. The ethnic composition of its population  and the character of the rural districts from which the migrants come are also discussed, along with the motives for migration, the nature of housing and employment.

Part 1: The Growth of Freetown

1. Tribal Settlements in a Creole City

3. The Background to Rural Emigration

6. Ethnic Groups and their Relations

9. Young Men's Companies Among the Temne

Appendices: 1. 'Rules for Alimamies of Alien Tribes in Freetown' Made Between 1888 and 1892

Michael Banton was Lecturer, and subsequently Reader, in Social Anthropology, University of Edinburgh, 1954-65, and professor of Sociology, University of Bristol, 1965-92. He was President of the Royal Anthropological Institute of Great Britain and Ireland 1987-89, and President of the Sociology section, (1970-71) and the Anthropology section, (1985 - 86) within the British Association for the Advancement of Science.

West African City: A Study of Tribal Life in Freetown