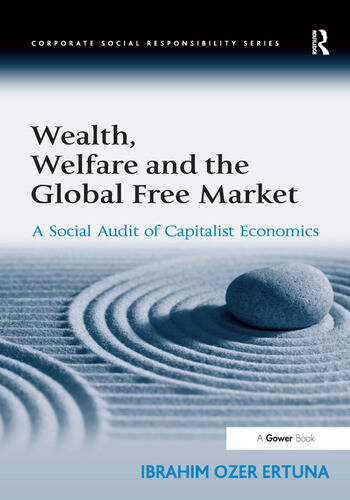 Wealth, Welfare and the Global Free Market: A Social Audit of Capitalist Economics

Can the free market system continue to operate in a traditional way in a world that is now globally connected, financially dysfunctional, and becoming environmentally damaged by excessive consumption? Can an alternative approach that respects human culture and values at least as much as it does profit be readily identified? In this rigorous critique, the author, who is a former member of a World Bank mission and adviser to the Turkish Prime Minister, suggests that the answer to both questions is 'No'. Emphasizing the distinction between wealth and welfare, Ozer Ertuna recognises that the search for a helpful way forward based on classical economic concepts, models and arguments is likely to prove fruitless. In this challenging book you are invited to consider that different approaches are needed. Using a mixture of theory and practical examples, Professor Ertuna examines markets and international trade in the era of globalization from scientific, economic, cultural, philosophical and faith-based viewpoints. He explains how what he describes as 'The Science of the 21st Century' may be part of any new emergent order. His survey of the different perspectives details what is being proposed by the 'Post Autistic Economics' movement; the Nobel laureates of the Santa Fe Institute; 'critical theoreticians'; environmentalists; and others. Vedic philosophy, other belief systems, and the significance of Anatolian culture may not be part of the usual discourse for business leaders, but as the role of business in society becomes ever more critical, an understanding of the range of perspectives brought to us by this book becomes increasingly essential. Those with an academic interest in the issues addressed here, as well as business and community leaders, policy makers, and those in government and non-governmental organizations will want to read this valuable addition to Gower's highly respected Corporate Social Responsibility Series.

Contents: Introduction; Economics and economic systems today; Capitalism's definition of human beings; Competition: the driving force of economics; The market guidance of the economy; The first concession of market economies; Misguidance of the markets and crises; Costs and benefits that are not reflected in markets; Demand and production: the theory and the reality; What is the objective: profit or income?; Foreign trade; The New Economic Design; An interrogation of capitalism; Index.

Professor Ibrahim Ozer Ertuna studied first in Turkey then completed an MBA and his PhD at Cornell University in the USA. He has lectured both in the USA and in Turkey, currently teaching at Okan University in Istanbul. Dr Ertuna has been a consultant and a board member of a number of companies, an advisor to the Turkish Government and Prime Minister, and has participated in a management audit of a World Bank mission. He has published over 100 scholarly articles and more than 20 books, including a commission for the World Gold Council. He is a member of the Editorial Advisory Board of the Social Responsibility Journal.

'Anyone whose thinking has been shaped by classical economic theory should read this book. Ertuna understands classical economics, which many of its critics do not, but he emphasizes the many ways in which it is lacking as a description of what motivates behavior.' - Seymour Smidt, Nicholas Noyes Professor of Economics and Finance Emeritus , Johnson Graduate school of Management, Cornell University 'Professor Ertuna ’s critical examination of unfettered Capitalism in world economics pleads for the development of economic models that encompass more factors concerning human needs. As a novice observer of economic systems and a recipient of USA government ad hoc agriculture commodity price supports in America’s heartland, I sympathize with that plea' - Willis R. Unke, Computer Software Engineering Manager, retired (Douglas Aircraft Co. and Sperry Computer Systems) 'This book is well written and in some cases convincing. I also share the feelings of the author regarding his dissatisfaction with the ugly faces of capitalism. Everyone with common sense would recognize that capitalism is far from perfect, and would agree with the author that we should always be searching for a better system..the author of this book reverses the casuality between social arrangements and ideas...I believe it is well written and readers will benefit from reading it.' - South-Eastern Europe Journal of Economics

Wealth, Welfare and the Global Free Market: A Social Audit of Capitalist Economics