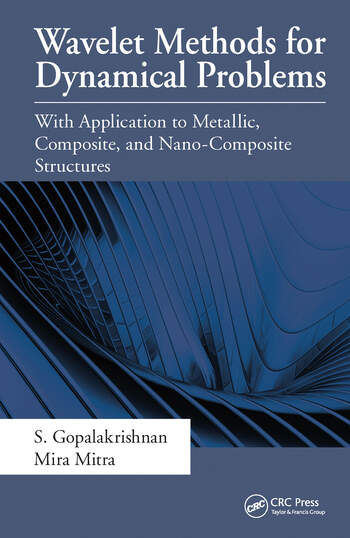 Wavelet Methods for Dynamical Problems: With Application to Metallic, Composite, and Nano-Composite Structures

Considering that wavelet transforms have also proved useful in the solution and analysis of engineering mechanics problems, up to now there has been no sufficiently comprehensive text on this use. Wavelet Methods for Dynamical Problems: With Application to Metallic, Composite and Nano-composite Structures addresses this void, exploring the special value of wavelet transforms and their applications from a mechanical engineering perspective. It discusses the use of existing and cutting-edge wavelet methods for the numerical solution of structural dynamics and wave propagation problems in dynamical systems.

Presents a new wavelet based spectral finite element numerical method for modeling one-, and two-dimensional structures

Many well-established transforms, such as Fourier, have severe limitations in handling finite structures and specifying non-zero boundary/initial conditions. As a result, they have limited utility in solving real-world problems involving high frequency excitation. This book carefully illustrates how the use of wavelet techniques removes all these shortcomings and has a potential to become a sophisticated analysis tool for handling dynamical problems in structural engineering.

Designed to be useful for both professional researchers and graduate students alike, it provides MATLAB® scripts that can be used to solve problems and numerical examples that illustrate the efficiency of wavelet methods and emphasize the physics involved.

Wavelet Methods for Dynamical Problems: With Application to Metallic, Composite, and Nano-Composite Structures