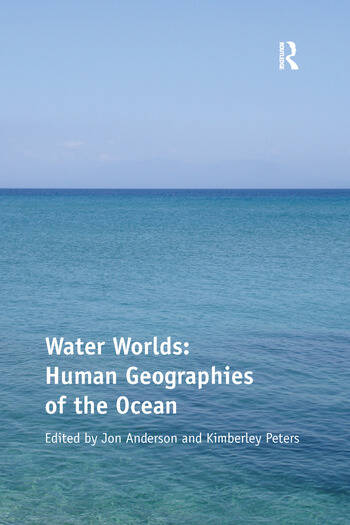 Our world is a water world. Seventy percent of our planet consists of ocean. However, geography has traditionally overlooked this vital component of the earth's composition. The word 'geography' directly translates as 'earth writing' and in line with this definition the discipline has preoccupied itself with the study of terrestrial spaces of society and nature. This book challenges human geography's preoccupation with the terrestrial, investigating the terra incognita of the seas and oceans. Linking to new theoretical debates shaping the geographic discipline (such as affect, assemblage, emotion, hybridity and the more-than-human), this volume unlocks new knowledge concerning the human geographies of ocean space. The book casts adrift stable, bounded and fixed conceptions of space and advances geographical understanding based on the world as 'becoming', changing, mobile and processional. This ontology supports the notion that the oceans are not simply fluid in a literal way, but also in a conceptual sense, suggesting that the seas have their own fluid natures - their own capacities and agencies - which are co-fabricated with social and cultural life. This book features twelve chapters, authored by key academics contributing to this growing field of research. The book is divided into three sections, including an Introduction by the editors and a foreword by Prof. Philip E. Steinberg, the leading scholar in the field of maritime geographies. The first section of the book considers the ways in which different watery spaces from the Atlantic Ocean to the Mediterranean Sea have been conceptualized, theorized and ’known’ through metaphors, voyages of discovery and scientific endeavour. The second section examines how oceans are experienced; through various activities including driving on water, kayaking in water and diving under water. The final section explores the relations between human life and the nature of the sea as a material, mobile and more-than-human spa

Contents: Foreword: on thalassography; Introduction: ’A perfect and absolute blank’: human geographies of the ocean, Jon Anderson and Kimberley Peters. Part I Ocean Knowledges: Understanding the Water World: Mediterranean metaphors: travel, translation, and oceanic imaginaries in the ’new Mediterraneans’ of the Arctic Ocean, the Gulf of Mexico and the Caribbean, Philip E. Steinberg; ’Plenty of weeds and penguins’: charting ocean knowledge, Anne-Flore LaloÃ«; Geographies of coral reef conservation: global trends and environmental constructions, BÃ¤rbel G. Bischof; Merging with the medium? Knowing the place of the surfed wave, Jon Anderson. Part II Ocean Experiences: Embodied Performances, Practices and Emotions: The day we drove on the ocean (and lived to tell the tale about it): of deltas, ice roads, waterscapes and other meshworks, Phillip Vannini and Jonathan Taggart; What I talk about when I talk about kayaking, Jon Anderson; Deep ethnography: witnessing the ghosts of SS Thistlegorm, Stephanie Merchant. Part III Ocean Natures: Mobilities and More-Than-Human Concerns: Sustaining livelihoods: mobility and governance in the Senegalese Atlantic, Juliette Hallaire and Deirdre McKay; Governance of the seas: a more-than-human perspective on the Cardigan Bay scallop fishery, Christopher Bear; ’With perfect regularity throughout’; more-than-human geographies of the Royal Mail Steam Packet Company, Anyaa Anim-Addo; Taking more-than-human geographies to sea: ocean natures and offshore radio piracy, Kimberley Peters. Index.

’This terrific book examines many elements of watery worlds, both historically and in the present. This is a very good example of how a new area of thinking and research can be brought into being through a carefully edited single book. It deserves a wide readership.’ John Urry, Lancaster University, UK ’In this smart collection of essays, human geographers and others are (re)introduced to the watery parts of the globe. If human geographers, and social scientists in general, have been largely neglectful of seas and oceans then this is a brilliant corrective which does some of the necessary catching up. Here the sea becomes a space of both control and rebellion, a material entity as well as a space of representation and practice. It sets an inspiring agenda for further research as it goes some way to filling in the blank space of the sea.’ Tim Cresswell, Northeastern University, Boston, USA