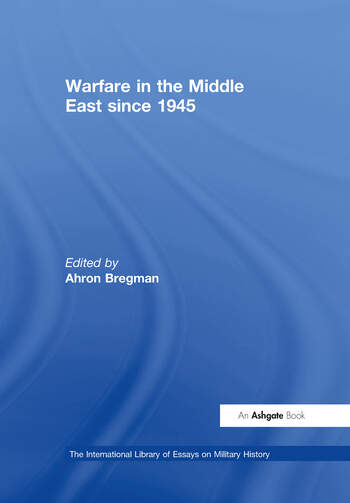 Warfare in the Middle East since 1945

From the end of the Second World War and throughout the era that came to be known as the Cold War, the Middle East was a battleground for Great Power rivalries and constant wars. These were fought between Israelis and Arabs, Arabs and Iranians, Arabs and Arabs and also between regional players and outside powers; the region was also the scene of several intense civil wars and insurgencies. The essays gathered in this volume focus on some of the most important facets of these Middle Eastern conflicts. Following a general introduction, the essays are then organised under three major sections. The first focuses on the Arab-Israeli conflict; the second on the Gulf Wars, and the third section concentrates on insurgencies. Together, these essays, all of which were written by leading experts, will provide the reader with a good introduction to warfare in the modern Middle East and show how conflict has shaped the region.

Contents: Introduction; Part I Arab-Israeli Conflict: The 1948 War: The historiography of the 1948 war in Palestine: the missing dimension, David Tal; The June 1967 Six Day War: The Cold War's longest cover-up: how and why the USSR instigated the 1967 war, Isabella Ginor; Air power in the 6-Day War, Kenneth M. Pollack; The 'big lie': inventing the myth of British-US involvement in the 1967 war, Elie Podeh; The 1969-1970 War of Attrition: Israel and the war of attrition, Robert S. Bolia; 'The Russians are not coming', Israel's intelligence failure and Soviet military intervention in the 'war of attrition', Dima Adamsky and Uri Bar-Joseph; The October 1973 Yom Kippur War: The Yom Kippur war: indications and warnings, Youssef H. Aboul-Einem; Strategic surprise or fundamental flaws?: the sources of Israel's military defeat at the beginning of the 1973 war, Uri Bar-Joseph; The 1982 Lebanon War: Personal whim or strategic imperative?: Israel invasion of Lebanon, Avner Yariv and Robert J. Lieber; Palestinian military performance in the 1982 war, Yezid Sayigh. Part II Gulf Wars: The Iran-Iraq War 1980-1988: Iraq's decisions to go to war, 1980 and 1990, F. Gregory Gause III; Ballistic missiles and chemical weapons: the legacy of the Iran-Iraq war, Thomas L. McNaugher; The Gulf War, 1990-1991: Saddam's security apparatus during the invasion of Kuwait and the Kuwaiti resistance, Ibrahim al-Marashi; The myth of air power in the Persian Gulf war and the future of warfare, Daryl G. Press; The 2003 War in Iraq: International law and the war in Iraq, John Woo; What was it all about after all? The causes of the Iraq war, Hakan TunÃ§; Does the Iraq war reflect a phase change in warfare, Avi Kober. Part III Insurgencies: Yemen: A regular army in counterinsurgency operations: Egypt in North Yemen 1962-67, David M. Witty: Intifadas in the Occupied Territories: The strategic impasse in low-intensity conflicts: the gap between Israeli counter-insurgency strategy and tactics duri

Dr Ahron Bregman is based in the Department of War Studies at King's College London, UK.

Warfare in the Middle East since 1945