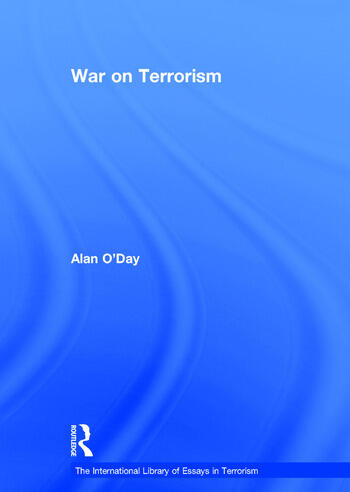 President George W. Bush maintained in his address of 20 September 2001, that the successful prosecution of the war against terrorism will require the judicious use of 'every resource at our command - every means of diplomacy, every tool of intelligence, every instrument of law enforcement, every financial influence, and every necessary weapon of war'. Unlike the Cold War, the War on Terrorism is neither a battle against some ideology nor bounded by physical boundaries or conventional political units such as nation-states. The War on Terrorism is the internationalisation, or rather, globalisation of previous wars. Terror is not a nation, and the enemies in such wars are not nations; any regime such as Libya simply by repudiating terrorism, can become an ally of the anti-terror coalition. Regimes that continue to practice terrorism against domestic opponents qualify to participate in the wider war if they conform to certain norms in external affairs. The 28 articles reprinted here consider aspects of that most amorphous of animals - the War on Terrorism. They do not set out to provide all of the answers; nor do they radiate a unified vision of what constitutes the war on terrorism; the pieces begin from a range of political and intellectual outlooks. Taken as a group, however, the difficulties of determining the limits and nature of the war on terrorism receive important attention. The authors address several major themes within the war on terrorism: what falls within its perimeters, its shifting manifestations, implications, responses and future directions.

Dr Alan O'Day is a Fellow in Modern History at Greyfriars, University of Oxford, UK.

’...[volumes in] The International Library of Essays in Terrorism series published by Ashgate are really superb sources of high quality academic research and provide an invaluable resource for those who may not have time to search for such articles nor have access to the variety of journals within which they are published...essential reading.’ Professional Security '..the strength of the two volumes [The International Library of Essays in Terrorism] lies in the easy access they provide to contributions on a very topical mattter, and, as such, they comprise a handy and useful starting point for both researchers and students.' Journal of Peace Research 'The compilation of articles by the author, on various facets of terrorism provide a wealth of knowledge and pertinent literature on the subject and the related aspect of legal framework, weapons of mass destruction and economic warfare. An excellent addition for the study of war on terrorism.' -Liutenant General Chandra Shekhar, PVSM, AVSM (Retd), U.S.I. Journal, July-September 2006