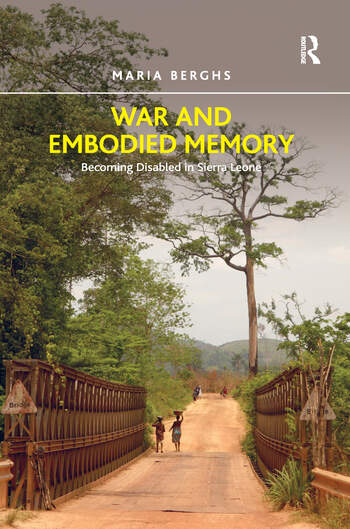 How do you become an 'amputee', 'war-wounded', 'victim' or 'disabled' person? This book describes how an amputee and war-wounded community was created after a decade long conflict (1991-2002) in Sierra Leone. Beginning with a general socio-cultural and historical analysis of what is understood by impairment and disability, it also explains how disability was politically created both during the conflict and post-conflict, as violence became part of the everyday. Despite participating in the neoliberal rebuilding of the nation state, ex-combatants and the security of the nation were the government’s main priorities, not amputee and war-wounded people. In order to survive, people had to form partnerships with NGOs and participate in new discourses and practices around disability and rights, thus accessing identities of 'disabled' or 'persons with disabilities'. NGOs, charities and religious organisations that understood impairment and disability were most successful at aiding this community of people. However, since discourse and practice on disability were mainly bureaucratic, top-down, and not democratic about mainstreaming disability, neoliberal organisations and INGOs have caused a new colonisation of consciousness, and amputee and war-wounded people have had to become skilled in negotiating these new forms of subjectivities to survive.

Contents: Part I: Setting the scene: locating disability in Sierra Leone; Intersections between anthropology, disability, development and conflict; A general and socio-cultural analysis of impairment and disability; The political background of the creation of disability. Part II: Rebuilding and rehabilitating the nation state: creating national memory and disabled subjectivity?; Rebuilding the social world; Managing life as an individual?; Disability mainstreaming and social activism; Reparations, reintegration and peace; Looking to the future; Appendix; Bibliography; Index.

Maria Berghs is a Research Fellow in Health Sciences at the University of York, UK.

’In War and Embodied Memory Maria Berghs provides a masterful and scholarly account of the experiences of war-wounded people following the decade-long civil war in Sierra Leone. It is essential reading for students, researchers and academics across all academic disciplines. No one with an interest in the creation of disability, poverty and inequality in the global south should be without it.’ Colin Barnes, University of Leeds, UK ’At times harrowing, at others hopeful, War and Embodied Memory is an important and timely exploration of disability, survival and resistance in post-conflict Sierra Leone. The engaging and accessible multi-layered analysis takes forward our understanding at both macro and micro levels and provides essential insights for anyone with an interest in disability studies, anthropology or global justice.’ Alison Sheldon, University of Leeds, UK 'War and Embodied Memory describes how an amputee and war-wounded community was created after a decade long conflict in Sierra Leone. Beginning with a general socio-cultural and historical analysis of what is understood by impairment and disability, it also aims to explain how disability was politically created both during the conflict and post-conflict, as violence became part of the everyday. Though the book covers vast intellectual ground, it remains compelling and persuasive throughout and effectively contributes essential ideas to studies of disability, post-conflict reconstruction, poverty and anthropology... Her extensive fieldwork in Sierra Leone allows Berghs to provide a compelling and well-rounded approach to conceptualising disability. Preconceptions of the conflict are immediately shed by the reader when Berghs recounts an interview with the frustrated chairman of the Amputee and War-Wounded Association (AWWA), a man whom she explains has dealt with countless outside organisations trying to help. He implores her to, ’Ask us how we survive.’... The depth and scope of Berghs’ res