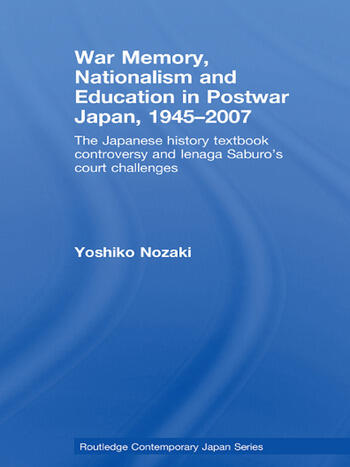 The controversy over official state-approved history textbooks in Japan, which omit or play down many episodes of Japan’s occupation of neighbouring countries during the Asia-Pacific War (1931-1945), and which have been challenged by critics who favour more critical, peace and justice perspectives, goes to the heart of Japan’s sense of itself as a nation. The degree to which Japan is willing to confront its past is not just about history, but also about how Japan defines itself at present, and going forward. This book examines the history textbook controversy in Japan. It sets the controversy in the context of debates about memory, and education, and in relation to evolving politics both within Japan, and in Japan’s relations with its neighbours and former colonies and countries it invaded. It discusses in particular the struggles of Ienaga Saburo, who has made crucial contributions, including through three epic lawsuits, in challenging the official government position.

1. Japan’s Defeat, Educational Reform, and the Japanese National Narrative and Identity in the Early Postwar Years, 1945-1965  2. The Politics Over eduCation: Oppositional Forces and Ienaga Saburo’s First and Second Textbook Lawsuits, 1950s-1970s  3. Counter Memories of the Asia-Pacific War: The Struggle for Recognition, the History Controversy, and School texTbooks in the 1970s  4. Ienaga Saburo’s Third Lawsuit and Strategic Conjunctures: Changing Intra- and Inter-National Relations and the Textbook Controversy in the 1980s  5. What is Historical Fact? Dispute Over Historical Research and Education in Court  6. Court Decisions on Ienaga Saburo’s Lawsuits and Critical Trends in History Textbooks, the Late 1980s-1997  7. Nationalism, Democracy, and the Textbook Market: Right-Wing Nationalist History Textbook Projects, 1982-2007.  Epilogue: The Japanese History Textbook Controversy and the Significance of Ienaga Saburo’s Textbook Lawsuits